Today’s minute focuses on the bizarre thought that robots are becoming cheap enough that they could be used against us by terrorist or criminal organizations sooner than later. A couple of articles brought this up for me this week…

Could the Terminator scenario come true? Probably not. Probably something more like the 1984 movie Runaway with Tom Selleck (penned and directed btw by Michael Crichton) where a madman or group of madmen intent on creating chaos or destruction start using robots against us. 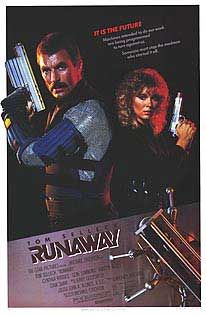 If you start looking at the consumer marketplace, you’ll find all kinds of robots entering the realm where anyone can buy them. Roomba, Aibo, Pleo, Elmo… all of these are available on shelves in stores across the United States, if not the world. And if you have the knowhow, you can take them apart and reassemble them into something devastating. Imagine RC-controlled bombs? Scary.

Now, I’m not convinced of Professor Noel Sharkey’s argument that suicide robots may replace suicide bombers. Most terrorist groups such as Al Qaeda seem to put value on self-sacrifice when putting themselves out as suicide bombers. If they go out in a bang, they take out infidels with them.

I can’t pretend to understand the mindset of these people willing to blow themselves up. As an outsider, it almost appears that these people are playing some sort of bizarre video game where the one who takes out the most people with him gets the highest score and therefore more virgins.

What scares me more are the non-religiously motivated people. These are the folks I see becoming more of a threat. Can you imagine eco-terrorists or standard everyday criminals getting ahold of some of the new robots in use by the police or military?

The good thing is that the cost to create some of the more advanced robots is still high. But as costs drop and more parts and pieces become available to the average person, what’s to stop a fanatic from combining a RC car, a Roomba, and some homemade explosives to terrorize a school? Can you imagine someone with engineering skills devising a swarm of killer robots intent on destroying the supporting pillars of major buildings? Oklahoma City would pale in comparison. A little engineering knowhow and you’re talking maximum destruction. We live in a free country where someone could pull this off. We’re concerned about the rest of the world attacking us as we fight back after 9/11, but what if it’s US attacking US?

This concludes today’s paranoid minute. Hopefully you’ve enjoyed these bizarre thoughts that are the result of random firing neurons in my brain. Well, enjoyed maybe isn’t the word…

Let me know your thoughts on the subject!