Who knew it was possible to sing cheerfully about heartache? James Maddock has certainly had his share. He had a taste of stardom in 2000 and then hit bottom as he adjusted to life in the States, saw his marriage fail, and had his record label decide to drop him and not release his follow-up album to Songs from Stamford Hill with his band Wood. After that round of bad luck, Maddock disappeared from the limelight. But he didn’t give up during the last 10 years. 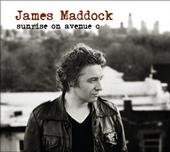 In 2009, Maddock came back and is telling stories through the tracks of Sunrise on Avenue C. Each of the twelve songs tells a bit of the story about a relationship beginning, waning, and possibly ending. It’s a rare thing to find an album crafted to be listened to beginning to end. But when you find such an album, I feel you should enjoy it the way it was meant to be heard instead of picking and choosing individual songs.

These songs have a little of everything – strings, guitar, piano – and beautifully constructed melodies and lyrics. It’s obvious he took his time getting this effort “just right” before releasing it to the public.

Among my favorites is the title song “Sunrise on Avenue C” which expresses the doubts in all relationships and the little restarts we go through now and then to keep love alive. Maddock’s breathless voice sings… “We came to make this place our home / you say you’ve had enough you’re movin’ on / … / you say nothing’s quite the way it seems / forget the past, we’ll start our lives again / don’t shake your head ’cause baby I know we can…” I think all lasting relationships have those moments and the rise and fall of the song captures those rises and falls in relationships nicely.

“When You Go Quiet” is another of my favorites. “There’s one thing that you do when you’re not ok / you don’t bang on the walls / you don’t return my calls / when you go quiet… it’s when I know you need to talk… ” Again, Maddock’s captured one of those universal truths in most relationships – those little things we keep an eye out for that indicate something’s not right. And it’s then we need to listen and find out what’s wrong. Tough to pass up a little relationship advice in a song.

All through the album, the music is consistently excellent. From the upbeat piano of “Chance” to the amazing guitar and strings rhythms of “Hollow Love” and the rock/blues guitar of “Straight Lines,” Maddock has put together a relationship album weaving together a tapestry of stories and tunes from beginning to end.

So if you’ve been wondering what happened James Maddock since he hit the airwaves in 2000 and toured with the likes of Paula Cole and Train, look no further… James Maddock is back and in rare form with Sunrise on Avenue C.

Be sure to check out his website for album and tour details at JamesMaddock.net.