Zombies. Even if you don’t like thinking about them, you’ve probably encountered them somewhere in the media. Perhaps you’ve seen one of the many different films from George A. Romero, something like I Am Legend or 28 Days Later, or even the dancing mob of undead in Michael Jackson‘s Thriller? There’s even a new television series coming to AMC in October 2010 called The Walking Dead. And then there’s the hordes of undead that can be found in comic books, short stories, and novels. 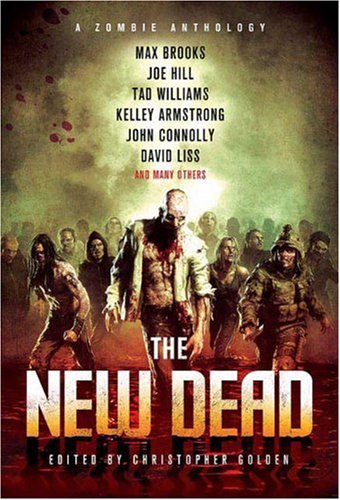 These days there even seems to be a new wave of zombies invading the fiction racks at local bookstores. From the almost plausible zombie terrorist plot of Jonathan Maberry‘s Patient Zero, to the Zombie Survival Guide, World War Z from Max Brooks, Pride and Prejudice and Zombies by Seth grahame-Smith, and the upcoming books FEED by Mira Grant and Zombie Britannica byThomas Emson… It’s a veritable zombie invasion! And I for one am extremely pleased.

Yes, I like zombies. There, I’ve said it. So when I saw that Max Brooks, Jonathan Maberry, Tad Williams, and other big authors had stories in the new short story collection – The New Dead, I knew I had to check it out. What I found was an uneven mix of stories… some of which I couldn’t read more than a few pages and some that touched an emotional place I didn’t realize zombie fiction could even come close to. Is it worth checking out? I think so, but be aware that there are some very odd stories in these pages along with some great work.

First, I’m going to focus on a story I found repulsive, but couldn’t stop reading for some reason. “What Maisie Knew” by David Liss is extremely well constructed, with a beginning, middle, and end that bring things to a satisfying ending that could also be the beginning to a new story. But along the way, you encounter the concept of zombie strip clubs, people who pay to have sex with zombies, and a protagonist who really deserves the karmic revenge he gets served. The story is unbelievably disturbing, and yet I felt like a rubber necker on the highway slowing down to see if I could spot any blood or guts in an accident. So if you’re squeamish about such things, I’d skip it.

A few stories later in the book, you find “Family Business” by Jonathan Maberry. Yes, I’m a Maberry fan. He has a tight, powerful style of writing that grabs me and won’t let me go. This story is about the Imura brothers – Benny and Tom – living in a world where people have constructed fortress towns to keep out the walking dead who plague the world. Tom is a zombie killer – someone who’s been trained and given permission to go outside the walls to take care of certain tasks. Benny is young and doesn’t understand what his brother actually does, so he’s forced to try and find work in another profession. He doesn’t have much luck or skill and eventually turns to Tom to join the “family business…”

I’m not ashamed to say this story moved me to tears by the end, and other than Mira Grant’s FEED due out in May 2010, I’ve never read a story about zombies that ever moved me emotionally in that way. Maberry has a gift. And I’m happy to say the first novel in his new Benny Imura series – Rot & RUIN – will be released in hardback from Simon & Schuster on October 5, 2010. And I’m already reserving my copy.

A couple of other stories grabbed me with their unique spin – “Weaponized” by David Wellington, and Joe Hill’s “Twittering from the Circus of the Dead”. Wellington poses a question – what if the military found a way to reuse dead soldiers? And Joe Hill’s series of “tweets” from the perspective of a high school girl who finds herself in a horrific situation far from civilization was simply inspired storytelling.

Does everything in the anthology work for me? Heck no, but that’s the beauty of anthologies. You get exposed to a variety of tales from authors you may not have read anything from before and you might just find something you like along the way. If you like zombies, check out The New Dead on bookstore shelves now. It’s definitely worth a read.

p.s. Pick up this book and others below!