When I was a kid growing up in the 1980s, The Transformers were one of the big series, alongside Danger Mouse, Dungeons & Dragons, G.I. Joe: A Real American Hero, He-Man and the Masters of the Universe, Silver Hawks, Thundercats, Voltron: Defender of the Universe, and many many more. It was an excellent time to be a kid. After-school and Saturday mornings were filled with adventures and brightly colored heroes to fill our time. 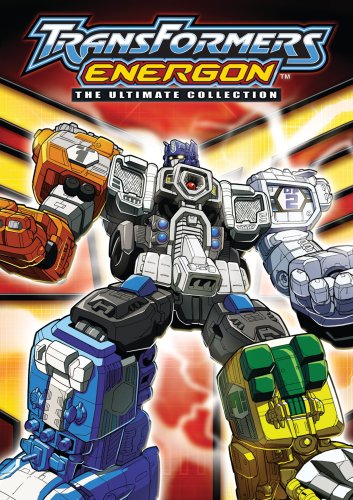 And it was almost always an attempt to market toys. None were ever quite as successful as The Transformers. So it’s only fitting that as time goes on (and with the success of the Transformers movie in 2007), we should see additional story lines for these popular transforming robots from the planet Cybertron.

The series begins with the Autobots and Decepticons working side by side with humans to harvest Energon. They find the rare material on Earth, but soon discover that a group of forces wants the Energon for themselves at all costs. A small, elite group of Autobots who can transform and combine into a much larger robot is all that stands in their way.

When Terrorcons begin attacking some of the Autobot/Decepticon bases in the solar system, they not only have to defend their mining operations to protect the Energon they’ve discovered, but find out who’s behind the vicious attacks. With the help of Kicker, a human who can sense when Energon is near, they must find more Energon to help them in their quest for peace.

Some of the old favorites are back in new ways. Of course Optimus Prime is still the leader of the Autobots and Megatron has long been destroyed. But the mysterious Alpha Q, intent on bringing Unicron the planet eater back to life, forges a sword from the Spark of the dead Decepticon leader. Megatron of course, has other ideas, wanting control again. Even Starscream makes an appearance, attempting to assasinate Optimus.

As the series continues, the Autobots are fighting a two-front war against the Decepticons and Alpha Q’s forces. The battles rage across the universe, on the worlds within Unicron, on Earth, and Cybertron, as the factions fight for control. Ultimately, Optimus Prime selflessly sacrifices himself to save his comrades and the universe from Unicron’s control.

Unfortunately there are no extras in this DVD collection, but the 1,000 hours of episodes is impressive to say the least. I wish there had been some special features to provide context in the grander Transformers universe.

Be sure to check out Transformers: Energon – The Ultimate Collection when it is released on December 16, 2008!

p.s. Pick up this great collection at Amazon: