One of my favorite series has returned to TNT at last! Six new episodes of Leverage hit television screens starting tonight – Wednesday, January 13. Our favorite bad guys gone good are back and scamming the scammers, helping the dispossessed, abused, and oppressed, and generally giving real villains a run for their money. 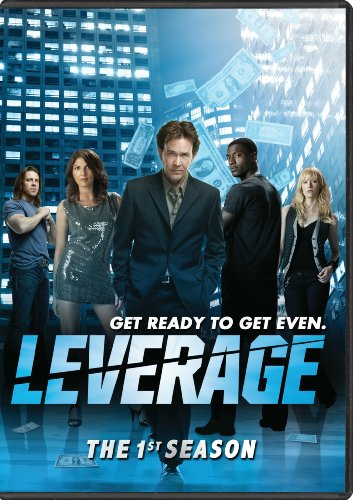 If you haven’t seen the show before, Leverage is about a group of mercenaries who turn the tables on companies and con men who steal or cheat good people. Nathan Ford (Timothy Hutton – Ordinary People), a former insurance fraud investigator, leads the team… Sophie Devereaux (Gina Bellman – Coupling) is the grifter brought in to help with each con. Eliot Spencer (Christian Kane – TNT’s Into the West) is the muscle for the team, focusing on martial arts, weapons, and other physical skills. Parker (Beth Riesgraf – Alvin and the Chipmunks) is the team’s cat burglar and safe cracker. And Alec Hardison (Aldis Hodge – Friday Night Lights) is the computer geek who can hack almost anything with a wire.

Now in their second season, the team has been pulling bigger and better cons than ever before. Back in September the summer run of season 2 left us on edge with “The Lost Heir Job“, where Sophie was feeling very conflicted with Nate, who just couldn’t bring himself to say he wanted her to stay. So she went on vacation to clear her head, having her friend Tara Cole (Jeri Ryan) fill in while she’s gone.

In “The Runaway Job,” we’re brought back to the world these intriguingly flawed characters inhabit and seeing just how much the team relies on Sophie to keep things moving smoothly on a job. Tara hasn’t really figured out how to fit into the group, who are honestly trying not to let her get too comfortable in the hopes that Sophie returns.

Nate and the team enter the world of high fashion to help take down a sweat shop manufacturing knock-off designs. To pull it off, they hijack a fashion show, manage to get the attention of an Asian gang, and almost get shot, blown up, and caught by the police. Yep, they’re back to their old tricks.

I absolutely adore the show, and it’s definitely the characters that make it work. And though I think Ryan is cute, her character is more than a little annoying to me. My wife and I are hoping that Sophie returns soon from her world travels to save Nate and the team from imploding any further. It’s the interactions between the main five players that makes the show work – and when you throw a wrench in the gears, like Ryan’s character Tara, things just don’t flow smoothly.

Yes, that’s probably the point and I’m just resisting change. But the characters get themselves into and out of new and amazing situations in every single episode and I don’t want that time to be wasted! That said, I look forward to seeing the rest of the new season.

Catch the “The Runaway Job” episode of Leverage tonight – Wednesday, January 13 at 10pm. (ET/PT) on TNT! It’s great that Leverage is back!

p.s. Pick up the first season of Leverage on DVD at Amazon below: