Tom and Jerry deserve to go down in the great cartoon duos with Bugs Bunny and Daffy Duck, Rocky and Bullwinkle, and Scooby Doo and Shaggy. Created in the 1940s by William Hanna and Joseph Barbera, Tom is a blue-gray tomcat and Jerry is a little brown mouse who seem to have had it in for each other since they were drawn together. 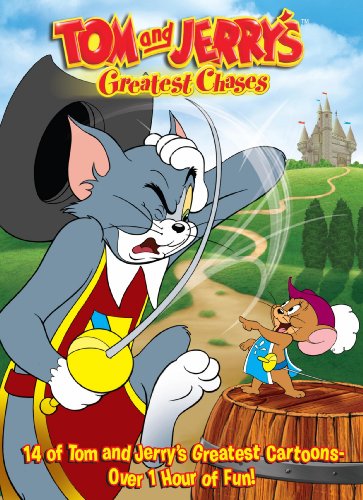 Since their debut with the 1941 short “The Midnight Snack”, the dynamic duo of cat and mouse have destroyed lives, homes, and each other in more than 150 shorts between 1941 and 1967. Hanna and Barbera directed shorts in the 1940s and 50s. Gene Deitch directed a few in the 1961 and 1962. Chuck Jones directed shorts between 1963 and 1967… So Tom and Jerry have undergone a few changes over the years.

Personally, my favorites are from the Hanna and Barbera era, and all of the 14 shorts included in Tom and Jerry’s Greatest Chases, Vol. 3 collection are from that era. There were even a couple that I don’t think I’d ever seen, which is odd considering the number of cartoons I’ve watched in my life!

Three of my all-time favorite Tom and Jerry cartoons are included on this DVD, which absolutely made by day.

“The Two Mouseketeers” (1952) and “Touché, Pussy Cat!” (1954) are both set in the France of Alexandre Dumas book The Three Musketeers, featuring Jerry as a “Mouseketeer” and a young, enthusiastic mouse. In “The Two Mouseketeers”, Jerry and his young companion decide to take advantage of a lavish banquet guarded by Tom.

“Touché, Pussy Cat!” acts as a prequel to “The Two Mouseketeers,” explaining how the young mouse came to become a Mouseketeer. Sent to Jerry to train by friend François Mouse, the young mouse is originally turned away. But as with all things, the youngster proves he has the heart of a Mouseketeer and helps Jerry beat Tom in a swordfight.

My third favorite is “Pecos Pest” (1955) when Jerry’s Uncle Pecos comes to visit and practice playing his guitar before appearing on a television program. When a string breaks on Pecos’ guitar, the nearest replacement happens to be one of Tom’s whiskers, which causes all kinds of issues for Tom and Jerry.

Somehow I managed to miss “Blue Cat Blues” (1956) and “The Flying Sorceress” (1956) after all these years, but it was fun to see them appear in this collection.

Once again, Warner Brothers has done a great job of pulling together a fun collection of 14 classic Tom and Jerry cartoons in Tom and Jerry’s Greatest Chases, Vol. 3. Be sure to look for it (as well as Volume 1 and 2) at your favorite online or local retailer or rental store!

p.s. Pick up Volume 3 and other Tom and Jerry greats on DVD from Amazon below!