Somehow, I managed to miss all of the episodes of The Universe when they aired on the History Channel initially. So when I sat down to watch the 12 episodes on The Universe: The Complete Season Three DVD collection, I found my inner “space geek” like I was as a child. 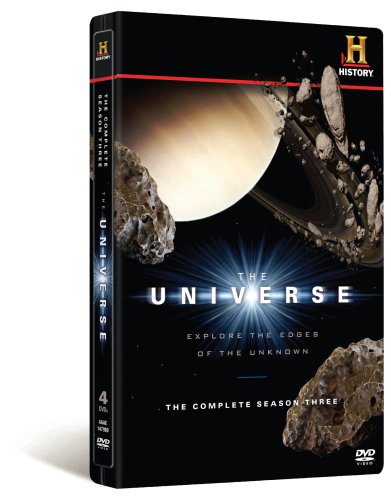 The Universe focuses on the sciences pertaining to our knowledge and understanding of the universe. This includes everything from traveling at light speed to distant galaxies and the potential of a “multiverse” of parallel universes to the possibility of planetary devastation due to an asteroid or comet strike and the many possible shapes and purposes of life on other worlds. Watching with my family, we were glued to the screen for each and every episode, learning from of the greatest minds in the space sciences.

Each episode uses a combination of interviews, narration, and computer imagery and animation to explain a topic, providing an incredible glimpse into the probable and the possible in terms of manned or robotic space exploration, theoretical physics, and the profound beauty, complexity, and simplicity of the stars.

Among the episodes I found the most interesting were “Parallel Universes” and “Alien Faces.”

“Parallel Universes” touches upon the prevailing theories of multiple universes. One theory is that the universe is simply so huge that there must be a duplicate of our own solar system somewhere else, right down to the individuals on planet earth. Another theory is that other universes exist in the same physical location as ours, but in different dimensions. (This was a theory recently explored on the TV series Fringe on FOX this past year.) And then there’s a theory that all of these other universes exist in a “multiverse” of possibilities.

In “Alien Faces” we go on a fictional safari into deep space in the future where we’ve discovered planets capable of sustaining life like we’ve never seen before. From artificial robot-like species to animals and plants adapted to high-gravity or water worlds, artists and scientists created an amazing array of computer animation to show us some imaginative and amazing creatures in these alien habitats. Among our favorites were the insect who started its life in the water, built a cocoon under water and then uses a balloon to rise to the surface and drift to dry land elsewhere.

But not all episodes flowed as well for me from beginning to end.

For example, “Sex in Space” is a sensational headline to get you to watch an episode about reproduction in space and space tourism. The content of the episode for the most part was great, discussing the difficulties that reproductive systems that have developed in an environment with gravity would face entering a microgravity environment. And the discussion of space tourism and a planned space cruise ship was interesting, since it focused on the commercial space race instead of government-sponsored space travel. But couldn’t they have come up with a better title?

Overall, I think The Universe is an amazing series for space junkies like myself. It’s great to once again become swept up in the enthusiasm and optimism of human travel in space and our ever-expanding knowledge of the universe around us. If you’re interested in any of the space sciences, I’d encourage you to pick up The Universe: The Complete Season Three to learn some of the current thinking about space travel and beyond!

p.s. Click on the images below to pick up your own copy of The Universe on DVD at Amazon: