Growing up in the 1970s, I caught sporadic glimpses of the Jonny Quest series from the mid ’60s on televison. And I was hooked. It took the best parts of James Bond and comic book heroes and boiled it down to an adventuring family and their sidekicks.

For the kids, you had Jonny Quest, the 11-year old son of Dr. Benton Quest. Jonny was smart, impetuous, and always getting into and out of trouble. Hadji was Dr. Benton Quest’s adopted son and Jonny’s sidekick. Not only was Hadji an Indian boy from the streets of Calcutta, but he also had strange mental abilities. And then there was Bandit, Jonny’s bulldog that was around for comic relief. 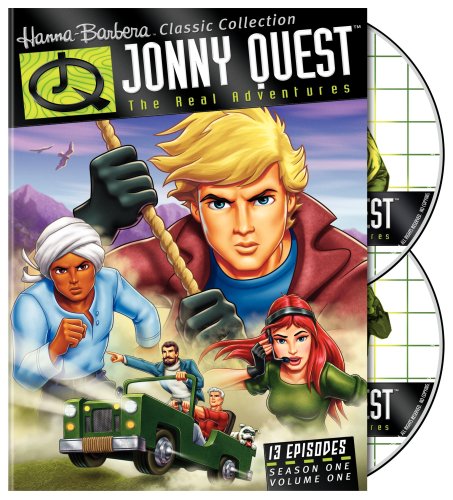 On the adult side, you had Dr. Benton Quest, a scientific genius accomplished in many fields and known around the world. And his sidekick/bodyguard was Race Bannon, a great guy who could kick butt and take names when he needed to save the Quests on their many adventures.

The team goes all over the world, solving mysteries and stopping evil. And where there was evil, there was Dr. Zin. Dr. Zin was an interesting combination of James Bond villains, alien technology, and mysticism. He was definitely a bad seed.

In 1995, there was a new Jonny Quest movie on TNT called Jonny Quest vs. the Cyber Insects. I remember watching this one on TV. And this led to a revival of the Jonny Quest franchise in the mid-90s as The Real Adventures of Jonny Quest.

The Real Adventures of Jonny Quest, Season 1, Volume 1 provides 13 episodes of the revamped series that included a new character – Jessie, the daughter of Race Bannon. In addition to traditional Jonny Quest-style adventures around the world, the show also added Questworld, a 3D computer generated realm, to try and bring the series up to date. This first DVD set includes half of the 26 episodes from season 1.

Though I appreciate the effort that must have gone into the series, I have to say that the computer-generated parts of the series didn’t work for me even in the mid-90s. Now these graphics look horribly outdated and clunky. I think I may have watched one or two episodes on television at the time and was disappointed, so stopped watching. It appears that the creators went back to the more 1960s-ish look and feel for the cartoon for season 2, so perhaps I will check out those sets when they are released in a year or two.

In addition to the first 13 episodes of season 1, the DVD set also includes a feature “Jonny Quest Returns: Modernizing a Classic for a New Generation of Fans,” which provided the producers and creators a chance to share some of their creative decisions when they chose to update the series.

p.s. Check this DVD set out at your local video rental store first, but you can also find it at Amazon:

p.p.s. If you were a fan of the original series, I highly recommend picking it up at Amazon: