Why did they ever take Whose Line Is It Anyway? off the air? Even now, years later, this insane group of comedians taping a television show of themselves doing improvisational comedy in front of a live audience is side-splittingly funny at times. 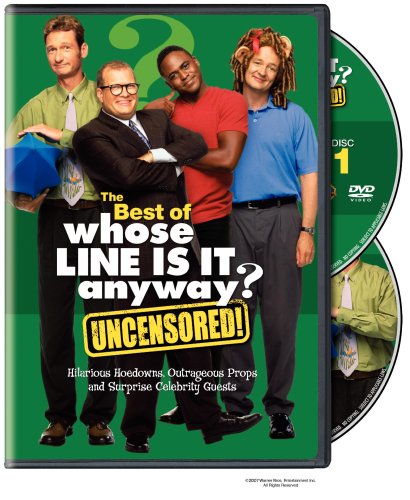 The British version of Whose Line? aired from 1988 to 1998 and then ABC began airing an American version here from 1998 to 2003. Some of the improv games included were “Scenes from a Hat”, “Props”, “Three-Headed Broadway Star,” “Irish Drinking Song,” and others.

Hosted by comedian and television actor Drew Carey, the ABC version held to the same premise as the BBC version. Ryan Stiles and Colin Mochrie appeared in every season and were accompanied by Wayne Brady, Greg Proops, Brad Sherwood, and Chip Esten, among others. Often, guest stars would appear on the show as well, including Robin Williams, Kathy Griffin, and Whoopi Goldberg.

The Best of Whose Line Is It Anyway? includes ten episodes and a one hour special on two discs. Celebrity guests included David Hasslehoff, Florence Henderson, Jerry Springer, Richard Simmons, body-builder Jane Tricker, the Loyola Merrimount cheerleading squad, and others… Though we were hoping for Robin Williams to be in this collection, his episode wasn’t included.

My wife and I watched all ten episodes and laughed until we cried at various points. This collection is uncensored, and though the language is pretty tame, there are some adult situations that never made it past the censors. Some of those bits were amazing, especially the episodes that included Jane Tricker, Florence Henderson, and the cheerleaders. When you put a group of funny guys and gals on a stage and let them run wild, you’re bound to get some things not meant for prime time television. And boy did they end up with some good stuff that never aired!

I really don’t know why the show ended after only five years. The show was extremely funny and typically family-friendly every episode. It was a well-rounded variety show with comedy and music. And the guest stars were typically either very talented comedians in their own rights or very good sports.

In addition to the ten episodes is a one hour special that recaps the highlights of seasons 1 and 2 of the ABC series. Included are bloopers, a few unrated bits, and some of the funniest moments up to that point.

However, any time I’m feeling a bit blue, I can now watch this unrated The Best of Whose Line Is It Anyway? collection and get my giggles. I only hope Drew Carey and the gang enjoyed themselves half as much as we did watching this DVD set!

p.s. Click below to check out The Best of Whose Line Is It Anyway? and other Whose Line? DVDs!