Growing up in the 1970s with a black and white television, I was no stranger to The Addams Family. Though the episodes were repeats from the mid-1960s, I always found them to be creative and fun. And the television theme song still bounces around in my head from time to time, finger-snaps and all.

So before I talk about the animated series, I want to provide a bit of context based on the television show.

The show (and the New Yorker cartoon series it was based on from cartoonist Charles Addams) focused on an eccentric family living in an old Victorian mansion near a graveyard. The house appeared a bit run-down with numerous items that would probably be more at home in a museum than in a domicile. It’s not the kind of place you’d really want in your neighborhood because the family is a bit strange and the house sticks out like sore thumb.

Led by patriarch Gomez Addams (John Astin) and his wife Morticia (Carolyn Jones), the family seems to exist in its own little bubble, only finding out what’s going on in the world when outsiders come to visit. Gomez likes to blow up model trains, dabble in financial markets, and smoke cigars, while Morticia tends to her garden, pruning the blossoms from roses and making sure her various carnivorous plants are well fed. Their kids – Pugsley (Ken Weatherwax) and Wednesday (Lisa Loring) – share their parents’ eccentricities. The pair constantly seeks more and more creative ways to kill themselves or learn of gruesome deaths throughout history.

In addition to the four main members of the family are Grandmama (Blossom Rock), skilled in witchcraft, and Uncle Fester (Jackie Coogan), a large, bald man with the ability to light a lightbulb by sticking it in his mouth. When you add in Lurch (Ted Cassidy), the Frankenstein-like butler, Thing, the disembodied hand often sent to get the mail, and Cousin Itt, the short walking wig, you get the impression this house is full of a bunch of crazy people. (And it most definitely is.)

Though the black and white TV series only lasted a couple of seasons and 64 half-hour episodes, the world of the Addams family had its own unique charm about it.

That brings me back to the animated series from Hanna-Barbera that aired in 1973. Unlike the live-action television series, the animated version has the family in a RV that looks something like their Victorian-era house. Though Ted Cassidy and Jackie Coogan were back as the voices of Lurch and Uncle Fester, they used different actors for the voices of the other characters. I was surprised to discover that the voice of Puglsey Addams was done by Jodie Foster (Silence of the Lambs)!

The animated Addams family tours the country in their unique RV – traveling everywhere coast to coast. They visit New York, Louisiana, Hawaii, New Mexico, Tennessee, and Kentucky among others. Everywhere they go, they cause trouble. In one episode they’re buying Central Park in New York City and in another they’re causing grief for astronauts on the moon. To be frank, I found it difficult to watch more than a few episodes.

Though the animation style fits with the rest of the cartoons from the era, including Scooby-Doo, Where Are You!, it has a bit of an odd twist to it more in line with the original Charles Addams comics. I think the more stylized character drawings worked to make the animated series more unique to a point. But the backgrounds seem very sparse compared to the other Hanna-Barbera cartoons of the time.

The Addams Family: The Complete Animated Series set includes four DVDs and all sixteen episodes of the one season that aired between 1973 and 1974. Unfortunately, there are no extras included on the DVDs, so there’s nothing to provide any additional context to the episodes.

Unless you’re a die hard Addams Family collector, I’d skip this DVD set to be honest. It really doesn’t capture the Addams charm. If you are looking for that charm – I’d find one of the collections of the John Astin-led The Addams Family or the feature films with Raul Julia on DVD.

For more information about this collection, check out the WB Shop.

p.s. For a few other Addams Family products, check below! 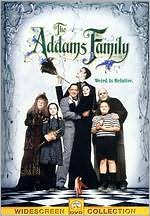 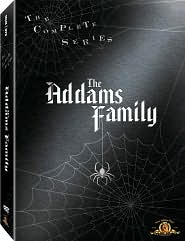