Though life is full of funny moments, I’ve only found a few things that can make me laugh consistently. Among them are Mel Brooks (nearly any of his films from Spaceballs and earlier), George Carlin, Monty Python, and Abbot and Costello‘s “Who’s on First?” routine. All of these comedy greats are masters of pointing out the absurdities of the English language. 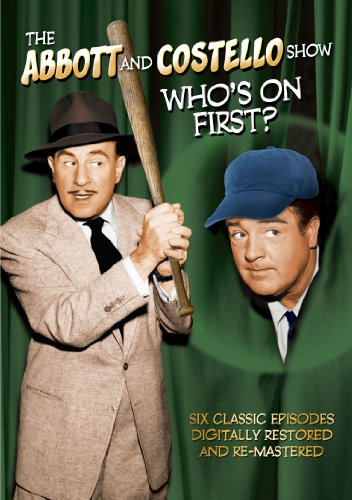 Over the last few years, I’ve been introducing my kids to some of these older comic greats as they’ve become more comfortable with language and responsibility. Though it wouldn’t do to have them reciting Carlin’s “The Seven Words You Can’t Say on Television” in class and have them get in trouble on my account! Along those lines, I’ve been seeking some of the comedy greats from television before swearing was commonplace. So when I saw that Entertainment One U.S. would be distributing DVDs of some of the The Abbott & Costello Show episodes from the 1950s, I knew it was a perfect opportunity to share more wordplay with my kids.

Like many comedy groups of that era, Bud Abbott and Lou Costello started long before television. They started with stage routines, eventually moving to movies and radio, and finally to television. In 1952, The Abbott and Costello Show entered syndication on stations around the country and the pair were able to use many of the same routines on television as they did on stage, screen and radio.

So to see the routine live on the episode “The Actor’s House,” was very cool. My daughters were confused, but the light went on in my 4th grader’s eyes, so I suspect I’ll be hearing stories about her attempts to tell her friends at school about it next week!

The The Abbot and Costello Show: Who’s on First? DVD includes six episodes – “The Dentist’s Office,” “The Birthday Party,” “The Charity Bazaar,” “Hungry,” “The Music Lovers,” and “The Actor’s Home.” These episodes include routines such as “Who’s on First?”, “The Lemon Pit,” “Alexander 4444,” “The Piano Bit (Alright!)” and many more. It was amazing to see all of these routines – and they’re just as funny now as they were back in the 1930s and 1940s.

Many of these routines were new to me, including “Alexander 4444” where Lou tries to make a local call and can’t get through, but characters keep interrupting him to use the phone to call long distance about the coffee business (“It’s a grind…”), a kangaroo farm (“The whole place is jumping…”), and others… Fun writing like that makes these routines family friendly and still hilarious.

In addition to Bud & Lou, the series also included other great characters including Sidney Fields, the pair’s always angry landlord; Hillary Brooke, the beautiful girl next door; Mike “The Cop” Kelly, who was always on Lou’s case; “Stinky” Davis (Joe Besser), the mean kid next door; and Mr. Bacciagalupe (Joe Kirk), the entrepreneur always thrown for a loop when the boys would “drop by.” All of these characters added to the brilliant and quick-witted minds of Abbott & Costello to produce some unforgettable moments.

If you’re looking for a way to enjoy two of the greatest comedic minds of a lost era, definitely check out The Abbot and Costello Show: Who’s on First? on DVD. You won’t be sorry and maybe you’ll figure out if Who IS on first base!

p.s. Pick up this and other great comedy classics below!