Before I can talk about Stargate Universe, I have to explain a bit of how we got here… 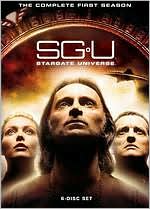 In 1994, a movie titled Stargate opened a whole new universe to movie-goers. Conceived by Roland Emmerich and Dean Devlin, the film took the Chariots of the Gods premise from Erich von Daniken that ancient civilizations were given advanced technologies by aliens welcomed as gods, dusted it off, and made it a huge science fiction success to the tune of nearly $200 million at the box office.

In the film, the idea is that ancient Egypt was enslaved by an alien calling himself the god Ra. This alien and his alien friends (other “gods”) flew in pyramid-shaped spacecraft and were able to traverse intergalactic distances through devices known as “Stargates” which used stable, temporary wormholes to instantaneously transport goods and people wherever they needed them. Eventually the natives on Earth grew restless and overthrew their alien masters, burying the gate deep in the sand with a stone inscribed with a warning to future generations not to open it again.

Of course, that’s just the beginning of the story. When it’s uncovered in 1928 by an archaeologist, it takes another nearly 70 years to find someone who can decipher its mysteries. Dr. Daniel Jackson (James Spader), Egyptologist, figures it out and goes on the adventure of a lifetime with a U.S. Air Force team led by Colonel Jack O’Neil (Kurt Russell). They find themselves on an alien world fighting a battle against an alien race with evil intentions and advanced technology. But never fear, the good guys win in the end!

Three years later, Brad Wright and Jonathan Glassner created a TV series based on the film that picks up where it left off. Stargate: SG1 (or just SG1 for short) aired for nearly 10 years and 214 episodes, becoming a huge phenomenon with Richard Dean Anderson and Michael Shanks taking over the roles of Russell and Spader. Together, they explore the universe jumping from gate to gate, finding new friends and fighting new enemies every step of the way.

In 2004, Wright and Robert C. Cooper spun off Stargate: Atlantis, opening up a whole new universe for a new team to explore. It aired for nearly five years and 100 episodes and was also quite successful.

Then in October 2009, a new Stargate series began airing on Syfy. Though in the same setting as the previous Stargate series Stargate: SG-1 and Stargate Atlantis, Stargate Universe (SGU) took a different path than its predecessors. Where SG-1 and Stargate: Atlantis took more of a Buck Rogers or Firefly approach, mixing high adventure with humor, SGU decided to go more for the Battlestar Galactica reboot feel with a dark, gritty, and more intimate approach.

After 15 years of adventure and humor, I think SGU felt a bit “off” for many people in its first season. One review I read said that it’s like “BSG, except without any appealing characters” and that it seemed to focus on the crew’s very many flaws as human beings.

Fortunately for me, I was in love with the show from the first episode. Though I loved SG-1 and Stargate: Atlantis, they sometimes got a pit campy at times. SGU, though a tad morose and depressing occasionally, was much more of a reality check – something that could happen vs. something that there was no way in heck would happen. Well, it’s “reality” as far as a bunch of human beings joyriding on an ancient spaceship traveling to who knows where is “realistic.”

At the start of SGU, we are introduced to a distant planet with a strange Stargate on it. Unlike all the other gates encountered so far which required eight chevrons (symbols) to dial out (similar to a phone call), this one required a mysterious ninth chevron that nobody had been able to decipher yet. So they created a video game and farmed it out to online gamers to solve. One of the gamers, Eli Wallace (David Blue), solves the mathematical equation and is whisked away on a spaceship. Eli is my hero – a geek in the wrong place at the wrong time doing everything he can to help.

Eli arrives on this distant planet along with a group of delegates including Senator Armstrong (Christopher McDonald), his daughter and aide Chloe (Elyse Levesque), and IOC representative Camile Wray (Ming-Na). Already present are Colonel Young (Justin Louis), Dr. Rush (Robert Carlyle), Lt. Scott (Brian J. Smith), and others. While celebrating the impending success of the mission beyond the mysterious Stargate, the planet is attacked and all heck breaks loose.

Instead of dialing Earth, Dr. Rush dials the ninth chevron and opens a wormhole to the unknown – and the only safe way off the planet before they are all killed by their attackers or by the planet itself, which seems to be on the verge of exploding. As the group of civilians and soldiers dive through the gate, they have no idea what may be on the other side…

Immediately you have a group of strangers thrust into a situation far beyond their control where every minute may be their last… And it’s that sense of danger and drama that really drew me into SGU. Yes, you still have the offworld exploration as the ship – called Destiny – stops briefly between galaxies. But for the most part, you have a microcosm of scientists, civilians, and military personnel in a confined space with no idea when or even how they might get home again.

Stargate Universe: The Complete First Season pulls together all twenty episodes of the first season on a set of six DVDs. Each episode is included in its entirety plus a few cool extras…

For me, the chance to see all of the SGU episodes – especially the first five, which are still my favorites – is awesome. The quality of the transfer is great and to have the extras such as commentaries and cast interviews provides some depth that you don’t get from the show by itself. Each episode reveals a new piece of the puzzle and I’m still watching even as season two has started on Syfy!

If you’re a fan of the show, I’d encourage you to check out Stargate Universe: The Complete First Season on DVD and Blu-ray at your favorite rental or retail counter!

p.s. Pick up the SGU DVD or Blu-ray and other great Stargate DVDs below! 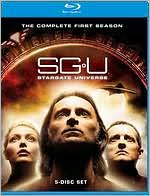 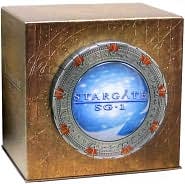