It’s no secret I’m a fan of well-done animated programs. Whether they were done in the 1940s or in just the last few years, it really doesn’t matter so long as they are fun and tell a good story. The style is less important, though I tend to enjoy good old two-dimensional hand-drawn animation and classic stop-motion more than computer-generated “pixel fests.” With a good story and passionate people working to bring that story to life, a great team can do almost anything with animation in any style.

That said, I am also a fan of old-school humor. Slapstick from artists like Charlie Chaplin and Buster Keaton, Laurel & Hardy, Abbott & Costello, and even the Three Stooges can be used not only to entertain audiences with wild physical antics, but can also offer social commentary in a non-confrontational way. The greats didn’t even need dialogue, just exaggerated facial and physical expressions to show action and emotion.

When you mix great animation, storytelling, and slapstick humor together, you can end up with something very special. Shaun the Sheep is one of those projects from Aardman Animation, the same folks who brought Wallace & Gromit to life. Using stop-motion, claymation techniques these brilliant folks bring an entire farmyard to life with a flock of sheep, three naughty pigs, a barnyard dog, and a clueless farmer. Without any speech at all beyond the lyrics of the theme song, each five minute episode tells a complete story with humor suitable for both kids and adults.

The latest DVD, Shaun the Sheep: The Big Chase, pulls together seven episodes of fun mayhem on Shaun’s farm. The episodes include everything from a runaway sheep on an ATV and a monster from the swamp to a runaway boat and rare migrating zebra ducks!

One of my favorites was the title episode for the DVD – “The Big Chase,” in which Timmy (the baby sheep of the flock) went for a joy ride on the Farmer’s new toy – a four-wheel ATV. Bitzer, the Farmer’s faithful dog, was supposed to be guarding it but Timmy was sneaky. And once he got the motor started, it was off to the races! Bitzer and Shaun tried to catch the ATV after stealing a motorcycle from a pizza delivery guy. The pigs tore off in a convertible to cause more chaos. And we got to see town nearby the farm for the first time I can remember. After they finally stopped the ATV, the Farmer, dressed in his finest riding leathers and helmet, gave it a spin and didn’t do nearly as well as the baby sheep!

Another great episode was “Bitzer from the Black Lagoon.” Whenever Shaun and Bitzer start playing soccer, you know nothing good is going to happen. This time when the ball gets lost in a nearby forest, Bitzer goes after it. Unfortunately, he finds the ball floating atop a small pond and when he tries to retrieve it, he ends up covered in swampy mud and greenery. When he gets back to the farm, he doesn’t look like Bitzer at all and scares the sheep into a panic. When the flock finally realize it’s really Bitzer under the muck and corner him to get him cleaned up, they get a bit of a shock instead!

And “Zebra Ducks of the Serengeti” introduces two troublesome ducks into the mix. These two birds decide to build a nest on the Farmer’s house, blocking the chimney. When Bitzer and Shaun finally get them off the roof, both birds are covered in soot and end up looking like a pair of rare Zebra ducks. The Farmer sees this as a money-making opportunity and decides to set up a small drive-through exhibit so he can show off these rare ducks. Unfortunately, like many of the Farmer’s plans, the ducks spoil everything by getting cleaned up just in time…

In addition to the seven episodes, you get a couple of bonuses. The “Mini Making of Shaun” video shows a bit about how each episode goes together and the amount of work involved. I’m always impressed seeing these talented folks getting the thousands of shots together for each five minute episode. The DVD also includes a music video (“Timmy’s Tune #1”) from the new show for preschoolers called Timmy Time.

If you like animated shows you can share with your family, it’s tough to beat Shaun the Sheep. We love all the characters and Aardman continues to add more to the series each season. Be sure to pick up Shaun the Sheep: The Big Chase at your favorite retailer or rental store if you get a chance!

p.s. Definitely check out this and other great Shaun the Sheep titles below! 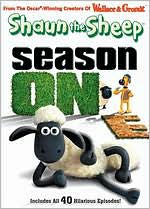 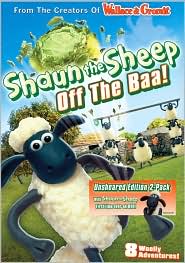