Whenever something new from Aardman Animation comes along, my family takes notice. Our fascination began when we found the Wallace and Gromit shorts on DVD. Stop-motion animation lovingly done in clay is tough to beat and A Grand Day Out and The Wrong Trousers quickly gave way to The Curse of the Were-Rabbit and A Matter of Loaf and Death. Like the animation addicts we are, we even liked the computer animated feature they did with DreamWorks – Flushed Away.

So when Shaun the Sheep left the comfy confines of Wallace and Gromit’s short film A Close Shave and started his own television series a few years ago, we were immediately fans as episodes began appearing on the Disney Channel in the United States. Slowly a great number of these episodes are finding their way onto DVD and we’ve been enjoying all of them! 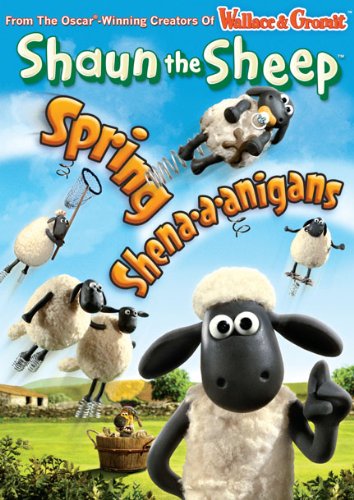 If you don’t know who Shaun is, he’s the leader of a flock of sheep on a farm. However, he’s not like normal sheep. He’s actually more like a human kid with creativity and a love for anything fun. As such, he gets himself (and his flock and friends) into quite a bit of trouble. Along with Shaun are many other fun characters like Shirley (the huge sheep who is a veritable eating machine), baby Timmy and Timmy’s Mother (easy to spot with the curlers in her hair), Bitzer (the farmer’s dog who tries to keep Shaun out of trouble), the Farmer (a clueless bloke who runs the farm but has no idea of what goes on), and the Pigs (who are always trying to get the sheep in trouble).

Like Wallace and Gromit, Shaun and his friends are animated using stop-motion techniques in a moldable plastic. The sets and characters are all hand-created and every second of an episode is composed of 24 individual shots. If you’re counting, that amounts to more than 7,000 individual shots in a normal 5 minute episode.

What’s amazing is that there’s no actual speech in any episode except for grumbling and the lyrics of the Shaun the Sheep theme song at the beginning. By removing the language element, I think it’s much more easily translated from country to country and culture to culture. The comedy uses classic slapstick visual gags and I have to admit I don’t mind the lack of words!

The new Shaun the Sheep: Spring Shenanigans DVD includes seven fun episodes. The baby sheep Timmy even gets top billing in a couple of them – “Spring Lamb,” in which he gets stuck on a spring and bounces around the farm while trying to avoid a bath; and “Supersize Timmy,” where he eats a tomato with “Miracle-Grow” on it and stomps through the farm destroying everything in his path King Kong-style. Also included are “Bagpipe Buddy,” “Cheetah Cheater,” “Lock Out,” “Draw the Line,” and “Ewe’ve Been Framed.”

We love that they’ve added a cat – Pidsley – to the mix in more recent episodes. He’s a vindictive little critter who gets himself and the rest of the farm into all kinds of trouble. In “Cheetah Cheater,” he watches a nature documentary about cheetahs on TV with the Farmer and decides he’d like to scare the flock a bit. He creates a cheetah suit out of one of the Farmer’s bathrobes and stalks the farm, scaring Shaun, Bitzer, and the rest of the farm. Eventually the flock catches onto his plan, but so does the Farmer – and he doesn’t appreciate the cat destroying his clothes!

“Bagpipe Buddy” shows how clueless and kind the flock can be at times. When a ball gets stuck in the junk pile, Shaun and Timmy go poking around and find an old set of bagpipes. They don’t know what it is until Bitzer finds a book and they decide it must be a sick duck. It’s hilarious to see them trying to fix the bagpipes and set them free so they can join their friends flying in the sky…

And in “Draw the Line,” a road line-painting machine is left nearby the farm and gets used in various odd ways. Initially, the Farmer uses it to draw the goalie box for a small game of soccer with Bitzer. Then Bitzer uses it to outline his doghouse and where his bowl and bone should go. But once Shaun and the flock get a hold of it, lines go everywhere around the farm as you might imagine. By the time the line painter gets his equipment back, the whole farm is in an uproar!

In addition to the episodes, the DVD also includes a game where you can shear the sheep on screen and a couple of extras from the new preschool series Timmy Time. If you’re looking for some family fun, my family will back me up when I say we highly recommend you check out Shaun the Sheep: Spring Shenanigans on DVD!

I have one extra copy of Shaun the Sheep: Spring Shenanigans for some lucky reader. If you’re a fan, all you have to do is leave me a comment on this entry and let me know you’re interested. The contest is open to U.S. residents only (sorry, cost of shipping is prohibitive internationally) and will end on February 18, 2011 – I’ll let the winner know by e-mail who’s getting the prize!

p.s. Pick up this and other great Shaun the Sheep DVDs below!