If any of you are fans of Wallace and Gromit or Chicken Run, you’ve probably heard of Shaun the Sheep. Or if you have kids and watch the short episodes that appear on the Disney Channel, you’ve probably heard of or even seen Shaun the Sheep, which seems to air between other shows. The stop-motion animated series is about a flock of sheep on a farm and the trouble they get into in their daily lives. 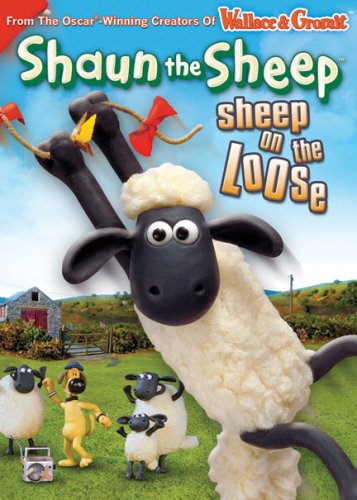 The character of Shaun the Sheep first appeared in Wallace and Gromit: A Close Shave back in 1995. In 2007 he got his shot at the big time in his own series. And over the last couple of years, working with Lionsgate, and HIT Entertainment, these great stop-motion animated episodes have been coming to the US on DVD as well as on the Disney Channel.

Aardman Animations uses traditional stop-motion animation to create their shorts. That means 12 pictures are shot with small models and sets for every second of air time. For a 5 minute episode of Shaun the Sheep, you’re looking at about 3600 pictures that are then shown sequentially to provide the illusion of movement. It’s a ton of work and Aardman has done an amazing job with their shorts, television series, and movies over the last 30 years, gaining quite a worldwide following here in the US since the mid-90s.

The Shaun the Sheep series focuses on a small set of characters. There’s of course the title character, Shaun. Shaun has a wide mischievous and curious streak that often gets him and his flock into entertaining predicaments. Bitzer is a farm dog whose responsibility it is to make sure things get done, including watching Shaun’s flock. As a consequence, he often gets drawn into the machinations of Shaun’s schemes. And then there’s The Farmer, who wears thick glasses and has little imagination. It’s his farm that all the characters live upon, and he is often duped by Bitzer and Shaun to get the sheep in and out of trouble. Beyond Shaun, Bitzer, and The Farmer, there are many other characters in the flock and around the farm.

The Shaun the Sheep: Sheep on the Loose collection contains six of the short 5-minute episodes, including “Sheep on the Loose,” “Saturday Night Shaun,” “Tidy Up,” “Shaun the Farmer,” “Camping Chaos,” and “If You Can’t Stand The Heat”. These are great episodes that feature many of the fun characters on the farm. From the mean spirited pigs who often get in the way of Shaun’s fun to the unbelievable appetite of Shirley, the biggest sheep in the flock who manages to eat everything or hide it in her fleece.

Watching with my daughters, we really enjoyed “Sheep on the Loose,” “Tidy Up,” and “Shaun the Farmer.”

In “Sheep on the Loose,” most of the flock hops on a bus to go to a nearby carnival to enjoy the games and food. Bitzer follows them to get them back to the farm, but that leaves Shaun in charge of making sure that The Farmer doesn’t see that the flock is missing. He employs a number of creative techniques to exploit The Farmer’s bad eyesight to hide the fact that the flock is missing while Bitzer does his best to hurry the sheep home. One of my favorite parts was when Timmy (the baby sheep of the flock) gets caught in a cotton candy machine and comes out in a big wad of cotton candy his mother bought.

“Tidy Up” centers around The Farmer cleaning his house and asking Bitzer to take out the garbage. When the bag rips and garbage becomes spread all over the pasture, The Farmer tells him to get it cleaned up (in the non-verbal grunts and hand gestures The Farmer uses to communicate). When Shaun and the flock laugh at his predicament, Bitzer gets upset has them do the work. As you might imagine, this doesn’t go well and culminates in the explosion of a vacuum inside The Farmer’s house, creating an even bigger mess!

And then in “Shaun the Farmer,” The Farmer is sick with Bitzer taking care of him. So that leaves Shaun in charge of the many chores around the farm. Once again, the sheep get involved to get the various tasks completed, from milking the cow to picking up the eggs from the chickens, from feeding the pigs to simply counting the flock. And as always, the sheep manage to cause a great deal of trouble during these chores. Who would have thought that having a sheep try and use a milking machine on a cow would be so entertaining?

In addition to the 6 episodes there are two features – “The Mini Making of Shaun” and “Building a Pig”.

“The Mini Making of Shaun” shows the animation process the Aardman crew follow to get the storyboards done, props and figures made, sets constructed, images shot, and so on. It’s actually a great introduction to the many steps of stop-motion animation.

And in “Building a Pig,” Harriet Thomas, one of the model makers for Aardman, works with a group of kids to create one of the naughty pigs from the series out of clay. As we watched, I learned some great new techniques for working with clay to form this type of character model and will hopefully get a chance to try it out with my kids.

If you’re a fan of Wallace and Gromit or any of Aardman Animations’ productions, Shaun the Sheep is a great example of well done, modern stop-motion animation. And if you have kids, they’ll love to see the antics of these wonderful characters. Be sure to pick up a copy of Shaun the Sheep: Sheep on the Loose at your local retailer or online!

p.s. Click here to pick up Shaun the Sheep at Amazon!