Before I begin this review, I must confess something. I’m a 41 year old married father of two and I still like cartoons just as much as when I was a kid. There, I said it! By now it’s probably no secret that I have a soft spot in my heart for well-written and animated cartoons, but I can’t stop. Hopefully I won’t have to stop until I stop breathing! 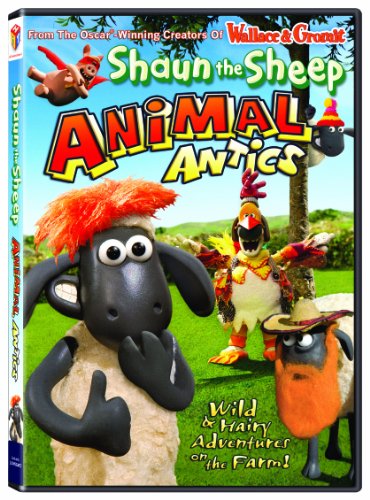 So why this confession? Because I need to explain my fascination and admiration for Shaun the Sheep. HIT Entertainment has just released a new collection of shorts called Shaun the Sheep: Animal Antics, and I have to say it’s one of my favorite collections since Shaun the Sheep: One Giant Leap for Lambkind. The DVD includes seven great stories this time covering everything from golf and garage sales to a persistent fox doing his best to find some dinner.

What? You don’t know about Shaun? Well, let’s remedy that!

Shaun the Sheep is a stop-motion animated series from Aardman Animations, the studio behind such great features as Wallace and Gromit: Curse of the Were Rabbit, Chicken Run, and Flushed Away. Shaun himself is a smart sheep with more than a touch of creativity that gets him in and out of trouble. He first appeared in the Wallace & Gromit short feature A Close Shave when he saved his flock from an evil mechanical dog that wanted to turn the flock into dog food!

The Shaun the Sheep series started airing in the UK on the BBC back in 2007, but started gaining quite a following in the US when the shorts started airing on the Disney Channel. Since then, HIT Entertainment has been releasing the shorts in DVD collections. Each short is painstakingly created frame by frame by the animators working with actual sets and plasticine/clay figures that can be posed in myriad positions. If every second of an episode is composed of 24 frames, you’re looking at more than 1,400 frames for one minute of animation – and each short is around five minutes long. That’s a long process and I have an amazing amount of respect for the artists involved.

The beautiful part of these shorts is the absolute lack of spoken words. Each character grunts, baa’s, barks, or grumbles its way through any “lines” that must be said – so it’s almost more like a silent film than a modern cartoon. The stories are told through facial expressions and gestures, which makes every frame that much more critical to making sure the intent is understood. As a result, you have a show that’s enjoyable for people of any age and language isn’t a barrier. It’s as though Charlie Chaplin has been channeled to a whole new audience.

Shaun is obviously the star of the show, but he has a lot of help on the farm. The Farmer has no idea at all what goes on when he’s not looking, but his ignorance is one of the things that gets made fun of quite a bit. The Farmer’s dog, Bitzer, really runs the farm along with Shaun and tries to keep the flock out of trouble. Shirley is the biggest sheep of the flock and is really an eating machine – and if she didn’t eat it but it was lost on the farm, it might be found in her thick wool coat. Timmy’s Mother tries to keep her baby, Timmy, out of trouble and succeeds sometimes. (Timmy has his own new spin-off show called Timmy Time for preschoolers.) The Pigs live next door to the flock and are constantly trying to get the sheep in trouble. And there are many other characters that crop up now and again to keep Shaun, Bitzer, and the flock on their toes.

Among the seven shorts on Shaun the Sheep: Animal Antics, there were three that really made me giggle as I watched with my two daughters ages 6 and 10.

In addition to the seven shorts included, there’s also a feature on “Building a Pig” that features one of the animators, Harriet Thomas, working with a group of kids to show them how to create one of the naughty pigs out of clay. There’s also a short video from Timmy Time.

If you haven’t seen Shaun the Sheep yet and want something to share with your kids, I recommend picking up any of the DVDs that have come out so far. Shaun the Sheep: Animal Antics continues the hilarity and would be a great addition to any family DVD collection. To learn more about Shaun the Sheep, be sure to check out the series website and watch for other great productions from Aardman Animation!