When Scooby-Doo and the gang come on screen in all their animated glory, I know I’m going to enjoy some part of the production – new or old. The pairing of Scooby-Doo as a talking dog and Shaggy as the eternal slacker are sure to provide comic relief with their Zen approach to food (the old “see food diet” – if they see it, they’ll eat it) and a fear of anything remotely scary. Combine those two with Fred Jones, the team leader and planner, the brilliant mind of clue hound Velma Dinkley, and the fashion sense of Daphne Blake, and you actually have a well-rounded clue crew working together to get to the bottom of mystery after mystery.

The new Scooby-Doo, Where Are You! – Season One, Volume 4: Spooked Bayou DVD release includes four episodes from the first season – “Which Witch is Which?”, “Go Away Ghost Ship,” “Spooky Space Kook,” and “A Night of Fright Is No Delight.” When Scooby-Doo, Where Are You! began airing in 1969, somehow I doubt that Hanna-Barbera had a clue it would still have an audience 40+ years later!

In “Which Witch is Which?” the gang drives the Mystery Machine (the green paisley van they drive everywhere) through a swamp on a “shortcut” only to find themselves face to face with a Zombie on the road. He’s not very forthcoming with directions, but they find themselves knee-deep in a mystery involving the uncommunicative monster and the Witch who brought him to life. Why is the creepy pair chasing everybody out of the swamp?

“Go Away Ghost Ship” pits the gang against Redbeard the Pirate… Why is a pirate ghost so interested in the ships of shipping magnate C.L. Magnus? What’s behind the hauntings and why are they so interested in a modern freighter? Can Freddie, Velma, and Daphne save Shaggy and Scooby from walking the plank from Redbeard and his ghost pirate friends?

In “Spooky Space Kook” the van runs out of gas near an old airfield and the gang meets the glowing alien who now calls it home. What does the alien want with the old WWII airstrip? Can they figure out what the alien wants and why he’s plaguing the local farmer?

And finally in “A Night of Fright Is No Delight,” Scooby inherits money from Colonel Sanders (not of KFC fame), but there’s a catch… He and the gang have to spend the night in the Colonel’s haunted mansion. Will they succeed? Or will they get scared away?

It was great fun to see these classic Scooby episodes again. Though I have to admit I’ve enjoyed recent Scooby movies like Scooby-Doo! Abracadabra-Doo and Scooby-Doo! Camp Scare, there’s an innocence to the originals done in a hand-drawn style as opposed to today’s crisp, clean computer-aided or CGI animation.

In addition to the classics, there’s also an episode from the Shaggy & Scooby Doo Get a Clue series that aired a few years ago. “Lightning Strikes Twice” pits our scared but well-meaning heroes against the evil Dr. Phibes who has created a machine to create worldwide lightning storms. We loved this series from 2006-2008 and were quite bummed that it wasn’t renewed. Somehow it captured a bit of the innocence of the original show while managing to merge it with a new villain and fun new mysteries.

If you love classic Scooby-Doo, be sure to check out Scooby-Doo, Where Are You! – Season One, Volume 4: Spooked Bayou on DVD at your favorite retail or rental counter!

p.s. Pick up this and other great Scooby DVDs below! 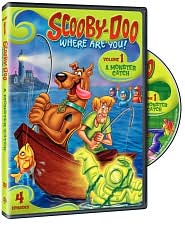 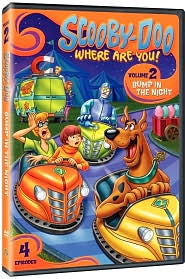