Back in April, I reviewed Care Bears – Cheer, There, and Everywhere, a collection of eight episodes from the 2007 animated Care Bears series meant to help younger children with some of the challenges of growing up. The episodes included lessons about friendship, helping others, and finding and using your talents. 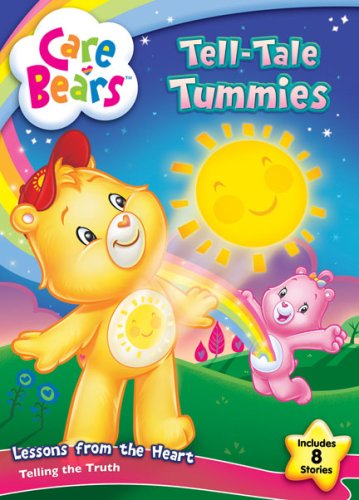 In early June, Lionsgate released Care Bears – Tell-Tale Tummies, another collection of episodes – this time about honesty, integrity, and telling the truth. As a parent, I have to say I was very amused at the fact that the Care Bears of Care-a-lot were compulsive liars throughout the stories. If you look at it from a young child’s perspective, it’s just a bunch of cartoons of fluffy bears with funny voices. But if you look at it a different way, it’s a collection of lies, exaggeration, and greed. The irony was not lost on me.

As I said in my first review, I’d been exposed to the world of Care Bears in the 1980s when my sister was young and collecting hundreds of stuffed animals (many of them Care Bears). It’s hard to believe they’re still around and making the toys 25+ years later.

If you’re still unaware of the Care Bears, they were a toy born of a marketing campaign from American Greetings in the 1980s that eventually became a series of animated shorts and movies.

In 2007, a new Care Bears animated TV series was on the air, using five of the bears as main characters: Share Bear, Cheer Bear, Funshine Bear, Grumpy Bear, and Oopsy Bear. Both Care Bears: Cheer, There, and Everywhere and Care Bears – Tell-Tale Tummies include eight different stories from the series.

Again, I watched the DVD with my youngest daughter (age 4) and she was entranced by these cuddly creatures. The stories are excellent. Lessons of why you should always tell the truth and keeping a positive attitude were great at this age.

Unlike Care Bears: Cheer, There, and Everywhere, there really are no extras to be found on the Care Bears – Tell-Tale Tummies DVD. It includes a few previews for other Lionsgate children DVDs along with the episodes. The nice thing however is the “Direct-Play” feature which goes right into the first episode of the eight after the previews are finished, which means you don’t have to mess with the menu before kicking off the kid-friendly parts of the DVD.

If you have little kids, especially little girls, I highly recommend this cute Care Bears series. You can find Care Bears – Tell-Tale Tummies at your local rental or video store.

Also check out my earlier review of Care Bears: Cheer, There, and Everywhere.

p.s. Pick up these two DVDs at Amazon here!