Since I got to college, I have been known as Fitz. My Dad was known as Fitz before me. Now my wife is known as Dr. Fitz… Suffice it to say there are a lot of Fitz’s in my family. But none of them – not one – are as sick, wrong, demented, and as big a self-centered a-hole as Richard Fitzpatrick (aka “Fitz”) (Jason Priestley, Haven, Tru Calling, Beverly Hills, 90120), the car salesman in Call Me Fitz. 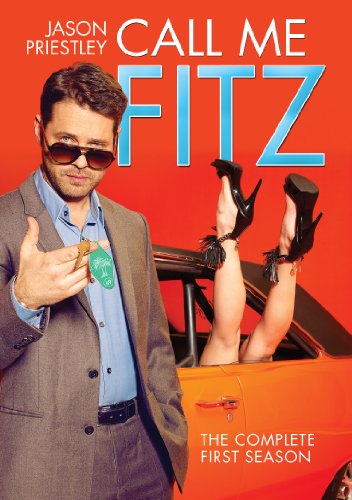 Call Me Fitz is a half-hour comedy series that has not been widely broadcast here in the US (except on DirecTV‘s Channel 101). It has been quite successful in Canada and just began airing season 2 in September 2011, with production already beginning on Season 3. It features Fitz, the bizarre behavior that is the norm at Fitzpatrick Motors, and a cast of side characters that get drawn into the wake of the trouble he causes.

Anybody who knows me will tell you I’m a pretty conservative, buttoned down kind of guy in blue jeans. So Priestley’s Fitz is about as far from me as you can get. He’s the classic slimy, misogynistic used car salesman with a drinking and drug problem. But somehow Priestley plays the character with a flair that makes him seem salvageable… sometimes.

So why is Call Me Fitz so much fun if it’s about a largely unlikable character?

I honestly think it’s not about Fitz at all – it’s about his relationship with Larry (Ernie Grunwald, Supernatural, Psych, CSI ). Larry is the opposite pole to Fitz’s depravity. He’s the show’s conscience. Where Fitz is slimy, Larry is upstanding and righteous. And though Larry is innocent and pure, he still manages to get drawn into Fitz’s schemes.

The whole series reminds me of an even more twisted Arrested Development, but with more strippers, drugs, and alcohol and a vaguely Charlie Sheen bad-boy weekend vibe… If you’re not a fan of swearing, drinking, rampant drug use, misogynistic behavior, or sex on TV, I’d definitely skip the series. But I think that’s part of the its charm. By losing all inhibitions and letting these characters do and say whatever they feel like, you are along for the ride and almost feel like encouraging behavior that would at the very least get you slapped in public and probably get you arrested.

Call Me Fitz: The Complete First Season includes all 13 episodes of the debut season along with some brief features. It starts with Fitz taking Babs on a test drive of a beautiful late-60s cherry red convertible Ford Mustang and getting into an accident to avoid hitting a white rabbit in the road. And it ends with an all out war on Fitz by his various conquests throughout the season. The road to self discovery in Fitz’s case seems to be through the bottom of several bottles of whiskey and more than a few bedrooms.

One of my favorite episodes is “Long Con Silver” which pits Fitz against the mother who abandoned him as a child – Elaine (Joanna Cassidy, Blade Runner, Hawthorne, Boston Legal). When Fitz has to find his mother to see if Larry is actually a blood relation, it leads to all sorts of fun revelations and a con game the whole dealership gets wrapped up in.

And another favorite was “The Upside of Matricide” which pairs Fitz with Larry and Ali to dispose of Babs’ body in the way she requested in her will. Not only did I get to see more of the beautiful and talented Kathleen Munroe use her comedy talents, but I reveled in the absurdity of using 130 pounds of pork ribs to replace a body before cremation.

The DVD set includes a few short interviews with cast and crew, bloopers, and a season 2 sneak peek, but I wish there were more extras. The bloopers are fun, but all of the features seemed very short and clipped so hopefully they’ll do more when season 2 is released.

If you’re a fan of shows with self-centered a-holes in the lead like Archer or House, Call Me Fitz should be right up your alley. Call Me Fitz: The Complete First Season is out on DVD now and I look forward to seeing the second season when it gets the DVD treatment sometime next year!