Batman. He’s an iconic DC Comics character who’s been around since 1939. He’s undergone a few changes over the years, though he’s always been a superhero tough on crime who chooses not to kill criminals, but hand them off to the authorities instead.

In popular media, Batman has been played on television in a campy way by Adam West, seriously on the big screen by Michael Keaton, Val Kilmer, George Clooney, and most recently Christian Bale. When animated, he’s also been fairly serious for the most part. That is until 2008 when Batman: The Brave and the Bold debuted on Cartoon Network. Batman: The Brave and the Bold treats itself as more of a campy kid’s show, with Diedrich Bader offering the voice of Batman and Bruce Wayne. But where most of the earlier animated series have shown Batman saving Gotham City by himself or with a few trusted friends, Brave and the Bold pairs the Dark Knight with other superheroes on a much more regular basis. And they’re all treated a bit less seriously and larger than life just like Batman is.

Each episodes features a mini-episode before the titles roll, and then the main adventure after that. Most of the time the two adventures are not interlinked. But it’s fun to see more of the DC universe come to life in a lighter style than we’ve seen in previous series.

Now in Batman: The Brave and the Bold, Season One, Part Two we get to see the final 13 animated adventures of the second season. These adventures feature Aquaman, Plastic Man, Blue Beetle, Red Tornado, Green Arrow, Wildcat, Deadman, Bronze Tiger, and Atom to take on a variety of comic book bad guys from Gorilla Grodd and Equinox to Solomon Grundy, Bane, the Joker, Catwoman, and many more…

This collection on two DVDs features my favorite episode of the show so far – “Mayhem of the Music Meister!” The Music Meister (Neil Patrick Harris), mad conductor of crime, harnesses the power of song to mesmerize heroes, villains, and ordinary people into stealing things for him. The whole episode is done as a musical from beginning to end, with all the main characters – Batman, Green Arrow (James Arnold Taylor), Aquaman (John DiMaggio), and Black Canary (Grey DeLisle) – fighting crime through song. It has to be one of the craziest, yet most fun episodes of any Batman cartoon I’ve seen anywhere.

Also included are great episodes where Aquaman helps Batman settle disputes on a different planet (“Mystery in Space!”), where Batman goes back in time to help Sherlock Holmes and Dr. Watson solve a supernatural crime (“Trials of the Demon!”), and much much more. Though I initially was put off by the humorous take on Batman, I came to realize that the writers and animators were honoring the spirit of Batman and increasing his audience at the same time by making the whole DC Universe more fun to watch.

Beyond the episodes themselves, there are no extras on the two DVDs included in the package, but that shouldn’t stop you from enjoying the campy humor. I’ve enjoyed trying to figure out who some of the lesser known characters are like Plastic Man, Wildcat, the Outsiders, and more. With season 3 of Batman: The Brave and the Bold kicking off soon, don’t you want to catch up on what happened with season 2? Be sure to pick up your copy of Batman: The Brave and the Bold, Season One, Part Two today!

p.s. Pick up the Batman: The Brave and the Bold DVDs below! 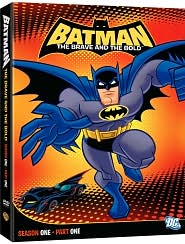