Though I’d seen a few comic books in my youth, my first exposure to the Batman phenomenon was in 1989 when I saw Tim Burton’s Batman on the big screen. From that moment on, Michael Keaton captured the duality of Batman for me – playboy by day (as bazillionaire/tychoon Bruce Wayne) and crime fighter (Batman) by night.

Then in 1992, Batman: The Animated Series really drove that home the comic legacy of the Batman character. Paul Dini and around 30 other writers took the Gotham City from the pages of DC Comics and breathed life into the heroes and villains that walked its streets. It was really the series’ four seasons that Batman graced my television screen that made me appreciate the depth of what DC Comics and Bob Kane had created from the late 1930s to today. 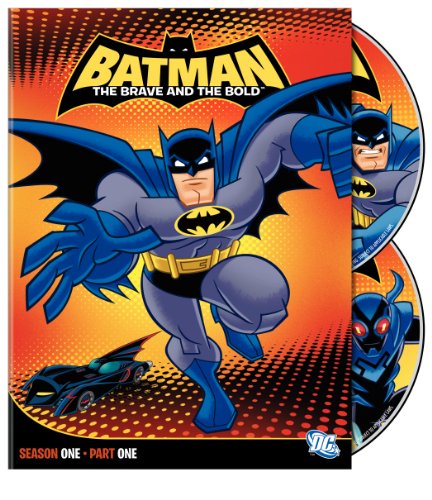 In 2008, a new chapter of Batman animation would unfold as Batman: The Brave and the Bold. But where previous incarnations of the world were portrayed in a serious vein, this new series amped up the campy, fun nature once seen in another Batman television product starring Adam West and Burt Ward as Batman and Robin in the 1960s.

The Brave and the Bold uses Batman (voiced by Diedrich Bader – The Drew Carey Show) as the straight man while still managing to incorporate the classic heroes and villains of the DC Universe with humor. Now DC Animation and Warner Brothers are releasing the first 13 episodes of season one in a two-DVD set – Batman: The Brave and the Bold – Season One – Part One.

In the first 13 episodes, we see an amazing array of heroes share the stage with the Dark Knight… We meet the Blue Beetle (Will Friedle, Batman Beyond, Kim Possible) as he’s just getting used to his alien powers; Plastic Man (Tom Kenny, SpongeBob SquarePants) who’s constantly struggling with his criminal side; the Red Tornado (Corey Burton, who seems to have been in 100+ different cartoons over the last 30 years) who is an android trying to understand what it is to be human…

But Aquaman (John Di Maggio, Futurama, Penguins of Madagascar, Ben-10) is by far my favorite. He manages to be endearing and annoying at the same time. Larger than life and willing to tell of his adventures to anyone who will (willingly or unwillingly) listen.

Not to be outdone, we also see many of the classic villains appear along with some I had never heard of… Kite Man (Jeffrey Combs, The 4400, Justice League, Star Trek: Deep Space Nine), gliding thief, nemesis and former employer of Plastic Man; Black Manta (Kevin Michael Richardson, The Penguins of Madagascar, The Cleveland Show), a surface dwelling criminal who seeks dominion of the sea; Gorilla Grodd (Di Maggio in another role), super-intelligent gorilla from Gorilla City seeking revenge over the human race; and many more…

Honestly, when I watch an episode of Batman: Brave and the Bold it’s a very guilty pleasure. It’s fun to see how cheesy some of the lines can be (deliberately) and how the bad guys inevitably foul up and let the good guys win. These are definitely simplified hero vs. villain stories, but they’re great for kids and adults who want to become kids again for a little while.

Other than the episodes and a game trailer, you don’t get any extras, but that shouldn’t prevent you from enjoying any of the 13 great episodes in this collection.

So if you’ve seen an episode or two and want to catch up or simply want to have a good time, be sure to check out Batman: The Brave and the Bold – Season One – Part One. I’m very excited to see when Part Two comes out so I can enjoy my favorite episode of the series so far – “Mayhem of the Music Meister!” starring Neil Patrick Harris as the Music Meister!

p.s. Pick up Batman: The Brave and the Bold today and enjoy some campy fun!