Now entering its sixth season, Supernatural was a favorite at our house from the beginning. There was something about Sam (Jared Padalecki) and Dean (Jensen Ackles) Winchester and their quest to save good people from bad things… The monster of the week format, plus the quest to find the “Yellow Eyed Demon”, and the continuing battle against demons big and small all was part of the appeal. But it’s really the relationship between the brothers – the dialog dripping with sarcasm and sharp wit – that keeps us tuning in season after season.

When Dean died at the end of season 3, we thought that would be it for the show. Instead, the writers managed to pull a new rabbit out of their hats and introduce a new story line. This one involved the angels! And Castiel (Misha Collins) pulls Dean out of Hell to get things started with a bang…

If you missed anything, the Supernatural: The Official Companion, Season 4 book by Nicholas Knight provides detailed synopses of each episode, plus some great additional material on the characters, monsters, and production. Though I’d seen this type of “series companion” in the past, I’d never actually looked at one before and I have to say that I was impressed. Knight provides an amazing amount of depth.

The book starts with a foreward from producer Ben Edlund that takes us into the dark world of Supernatural with humor. As he says, “the angels are coming” and we shouldn’t look at them… “They’ll melt your eyes into blind, salty s’mores!” This of course refers to the scene in “Lazarus Rising” where Bobby’s (Jim Beaver) psychic friend Pamela (Traci Dinwiddie) gets her eyes burned out by peering into angel business. Definitely one of the more memorable scenes from the season.

From there, we go right into how the angels came into things. Creator Eric Kripke had an epiphany – “angels are the other side of the demon coin.” And they were going more for the Christopher Walken in The Prophecy kind of angels, not the Touched by an Angel variety. When you met one of the Supernatural angels, you understood these beings to be God’s soldiers. Scary, less than kind folk who mostly think we’re about at the same levels of cockroaches.

This concept of “angels as dicks” as Kripke put it made this really work. When the big demons such as Alastair (Mark Rolston) or Lilith (Katherine Boecher) are involved in a story, you know things are going to go poorly for the Winchesters. And as the season progresses, you know that when Castiel, Zachariah (Kurt Fuller), or Anna (Julie McNiven) appear, the boys are in just as much trouble. This give and take between God’s army and Satan’s minions provides many great chances for Sam and Dean to get into and out of trouble.

But what really kicked the show into high gear for me was when Chuck Shurley (Rob Benedict) makes an appearance in “The Monster at the End of this Book.” Shurley has been writing books about Sam & Dean’s adventures that the boys never even heard of. And they’re popular. VERY popular. It turns out that Chuck is a prophet and every time the boys go on an adventure, he starts writing. This has to be one of my favorite Supernatural episodes ever, because it reminded me of the scene in Spaceballs where they’re fastforwarding through the tape of the movie during the movie…

In addition to providing details on every episode and major character for the season, Knight also includes several “A Closer Look” sections that describe different monsters or concepts from the show and where the ideas came from. These are one or two pages covering “Angels” or “Samhain” or “Magic Wishes.” With Halloween coming up next month, it was interesting to hear how the practice originated as a Celtic harvest festival at the end of summer. As Knight puts it, this is the halfway point between the light and dark parts of the year. “At this junction between light and dark, it was believed that the veil between the worlds of the living and the dead was at its thinnest…” So we wear masks and light candles in hallowed out gourds to make these spirits feel more at home. Somehow I doubt the spirits feel at home in the Disney character-dominated world of a modern Halloween.

Long story short, Supernatural: The Official Companion, Season 4 is a great addition to the bookshelf of any Supernatural fan who wants a good reference for prior seasons and a bit of the background behind the spooky stories told week after week!

p.s. Pick up Supernatural books and DVDs below! 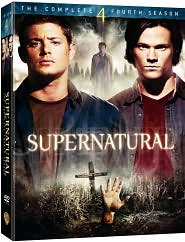