As a parent of two young girls, ages 3 and 7, I’ve regularly struggled with what brand or type of educational software to pick up for them. Over the last few years, I have to admit the track record of this type of software has been hit and miss, but the JumpStart series from Knowledge Adventure has been one of the most consistent vendors we’ve run across. 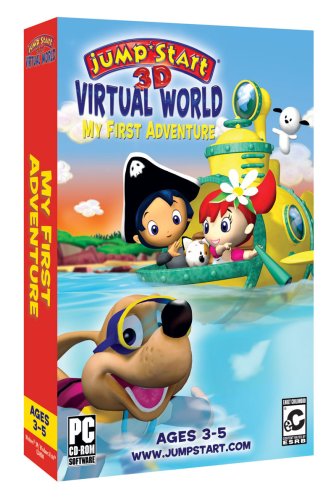 So when I saw a chance to review JumpStart 3D Virtual World My First Adventure, which is geared towards ages 3-5, I saw it as a perfect opportunity to see how my youngest daughter would do with it. She often “helps” her sister when she’s playing her “big girl” games on the computer, but we haven’t had a chance to pick up any software specifically for her.

The box for JumpStart 3D Virtual World My First Adventure has a cool holographic picture that changes as you move it (the kids in the boat wave, a dog jumps, and the dog in the water swims). That alone was enough to capture the attention of my 3 year old.

Installation was a bit more involved than I expected, requiring an initial installation from the CD-ROM, sign-up through the JumpStart website, and then a pass through a second installation to pick up any software updates. The JumpStart website allows you to add multiple children to the list of users, which is nice for tracking more than one child’s progress on the computer.

For inexperienced computer users, this whole process may be a bit of a challenge as they wonder why all of these steps are required to get their tykes up and running on the computer. However, the steps are pretty straightforward.

Once we actually ran the program, we were brought to an initial configuration page. This is again, not a page for the children who will actually use the game, but intended for the adult configuring the software. On this page, you can further customize the game for the children you signed up for on the JumpStart website. By adding birthdays, which holidays are celebrated (for example, not every family celebrates Christmas, Haunukah, or Kwanzaa), and personalized photos, you can really make this game fit into your world a bit more. I did not try adding actual photos, but would expect them to show up in the game further down the line.

After all of that, the kid(s) can actually play the game. The first thing they get to see is a smoothly animated 3D movie where the many characters sing and dance. It was a great little animated sequence with catchy music to get a child’s attention.

From there, the child can choose who is playing (from the list of kids you added earlier) and then customize an avatar to represent themselves in the game’s 3D world. Customizing an avatar is nothing new or different in the world of computer games, but I have to say this is the first time I’ve seen it done for children. And my girls loved it! Think of it like a virtual paper doll that the kids can change hair, eyes, mouth, and clothes on whenever they want to. I think my 3 year old got more of a kick out of changing her avatar than some other parts of the game.

Once the avatar is done, they are launched into the 3D world to explore. The hardest thing seemed to be learning how to navigate with the mouse. My 3 year old was having a tough time getting the hang of moving and clicking the mouse on the mouse pad to get it to do what she wanted on screen. This is just a hand-eye coordination skill that she will have to learn eventually, but it was tough to see her struggle with it.

That said, the child is able to follow paths of colorful letters to the different parts of the world to do different things. They start at the movie house, and move from there to customize their own house, and from there go to the school house, the library, and finally to the music machine. All along the way, they have to point and click at the various letters, objects, and characters. It seemed very easy to miss a letter with an errant click or moving the mouse too far. But again, I think this is a skill that will be learned over time.

In the school house, they can play a variety of different games, including matching letters, putting puzzles together, and so on. For each game they complete, they earn a “prize” that shows up in the mailbox at their house. So they can then leave the school house, go to the house, open the mailbox, and see what to do with the prize. One prize we saw was an apple, which you can leave in various places to decorate the world. Another prize was a CD you could take to the music station and play.

In addition, for each task they complete, they get a portion of a story book. When they’ve completed enough tasks, the whole story book is available and they can read it at the library. These books are interactive with creative stories to keep the child entertained.

When they have completed all the tasks in a “world” and earned all of the various available story books, they can move on to the next “world” and do different things.

I left my daughters playing this game together for about 90 minutes and their favorite part was going down the water slide in the pond and changing the avatar’s clothes. I think the rest will come with time, but I was amused to see what they found fun!

This should definitely be on your Christmas list if you have young children in preschool or who are getting ready for kindergarten. I think this software is fun AND educational, which is a difficult combination to get right. Once again, Knowledge Adventure proves that it’s the leader in the educational software arena with JumpStart 3D Virtual World My First Adventure!

We worked with this game on a Windows Vista machine, but I’m sure it works just as well on Windows XP or a Mac!

Check it out!
–Fitz

p.s. You can pick this game up for Mac or PC at Amazon: 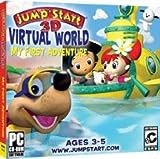