It’s rare that I read nonfiction these days that is worth reviewing. Most nonfiction simply consists of reference material, examples, and step-by-step instructions to help in a given field of study. As a software engineer, I often find myself digging into a particular book for an example or a hint as to how to implement a piece of code. But only rarely do I find myself reading a book from cover to cover. 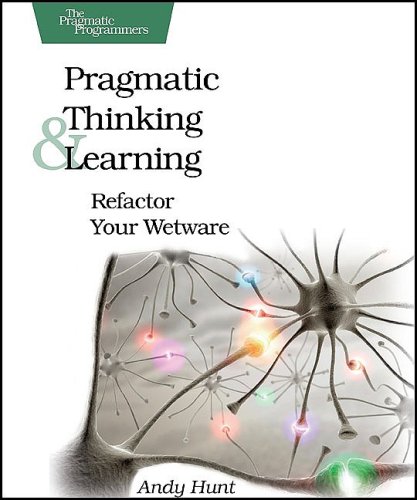 Pragmatic Thinking & Learning – Refactor Your Wetware is one heck of an exception.

The Pragmatic Programmers have focused on everything from source code control and testing to writing in a wide variety of languages and environments. And now with Pragmatic Thinking & Learning, they’ve gone beyond the philosophy of computer languages, tools, and environments and focused on the one constant through it all – the programmer him or herself.

That said, please don’t think this book is just for programmers, engineers, and other geeks! The book is so rich with techniques for expanding how you approach the world and develop ideas that I truly believe that people in any profession would get something out of it. So, among the many books published by the Programmatic Programmers, this is the one I think they should spread the word far beyond the bounds of the typical engineers they market to.

Imagine if you will, your brain. Each of us has developed a unique tool filled with pathways different than anyone else on the planet. No two people think exactly the same, even if they come to the same conclusions. Your brain, and therefore how you think and learn, is the product of all the experiences that brought you to this specific point in time.

Andy Hunt brings resources to your attention to make you think about how you think and learn. Regardless of whether you’re currently taking classes or not, you most likely think every day of your life and hopefully are learning on your own, through various experiences, every day as well.

But wouldn’t you like to think better? I know I would. I’m convinced that I do things more inefficiently than I might to get the most out of solving problems or learning or developing new skills.

Hunt focuses on little things to improve your methods, boiling a ton of research down into a set of 48 tips. Some of these are intuitive. Some are not.

For example, tip #1 is “Always consider the context.” This makes perfect sense. Without context, most intellectual pursuits lack meaningful hooks to actually make them useful. Though you might consider an apple on the ground as a unique object on its own, you can only get so far without looking at the larger picture. It makes much more sense when you consider the tree that it fell from and the many ecological systems that allowed the tree to grow, thrive, and ultimately produce the fruit that fell to the ground.

However, tip #14 makes less sense on its own — “Use metaphor as the meeting place betweeen L-mode and R-mode.” What exactly does this mean? It’s less clear until you read the text.

“Most humans aren’t particularly good at dealing with the abstract: using a metaphor to relate some abstract notion to something concrete, something found in everyday life, makes it much easier for people to grasp.” p. 87

Each chapter in the book follows a similar pattern. It provides an overview, a set of techniques to try with a variety of examples on how to do so, and a set of next actions to try. For example, Chapter 4: Get in Your Right Mind ends with two lists – one of new habits to try and cultivate such as doing morning pages, involving more senses, trying something different than you usually do; and one of things to try such as changing your morning routine, taking a class, or examining the experts you know to see what “quirky” habits they might have been using all along that never made sense.

I work from home 99% of the time. This automatically grants me some new distractions while reducing some of the old ones. For example, in the office I was constantly distracted by the social nature of the workplace, whereas now I’m distracted when my family has a day off and I’m trying to get work done.

Hunt works through how to reduce the number of times we switch context while working on a given project. For example, if you’re working on a report or e-mail and the phone rings, it’s a potential context switching event. If you have the discipline to let it roll over to voicemail, that’s great. It’s a minor glitch. But if you pick it up, you often have a hard time, once the conversation is done, getting back into the task you were working on before the interruption. One recommendation he makes in this case is to let the phone ring a couple of times while you jot down (in the report or e-mail, on a note, or wherever) a couple of cues so you can more easily pick up the breadcrumb trail of where you left off and get going again.

The book is chock full of interesting research and insights into how to use our minds more efficiently and possibly see the world in new and very different ways.

I can’t stress enough the fact that this is NOT just meant for programmers. People from all walks of life would most likely find some tidbits of information in this book to make our brains work better in the long run!

Many thanks to Andy Hunt and the Pragmatic Programmers for this excellent book, Pragmatic Thinking & Learning – Refactor Your Wetware and now I think I’m going to read it again, applying some of the new techniques I learned while reading it the first time!

p.s. Check out more about this book at the Pragmatic Thinking & Learning website here.

p.p.s. Pick up the Pragmatic Thinking & Learning book and The Pragmatic Programmer from Amazon: