Once upon a time, I was more aware of up and coming bands. While living around Denver, CO, I regularly listened to KBCO on the radio – a station famous for a mix of both new and old tracks. Through KBCO I was introduced to bands and performers like Peter Mulvey, Snow Patrol, Jason Mraz, Brandi Carlile, and many many others. Unfortunately I don’t get to Denver much to take advantage of that influx of new artists and music. So I’d never heard of the band White Apple Tree before… 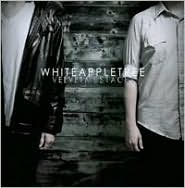 White Apple Tree (WAT) consists of brothers Ryan and Taylor Lawhon, and drummer Stefan Mac. Though founded in 2007 by Ryan as a solo project, his brother Taylor and Stefan joined pretty quickly after he recorded a solo five song EP – Taste the Celebration. In 2008, they released a single – “Snowflakes” – that was picked up by the hit TV show Gossip Girl, which gave them worldwide exposure far beyond their Southern California haunts as they toured across America and did numerous local shows. Fans clamored soon after for more songs from the group, resulting in Velvet Mustache – their debut album.

When Velvet Mustache appeared one day and I started to listen, I found myself immersed in a landscape of drums, synthesizers, and the occasional guitar and loving every minute of it. And as I started listening to the words behind the lush electronic landscape, I began to see a very unique point of view start to emerge.

What I immediately heard in the music itself were similarities to groups like Dishwalla and Snow Patrol – the layered electronic sounds mostly based around a synthesizer built upon with drums and voices singing about growing up in Southern California, the trials found in relationships of all kinds, and the swelling numbness all too common in the madness of the everyday.

“Youth” provides driving melodies and drums while its lyrics describing the seeming apathy of today’s kids. “We stick around because we don’t care / None of us have had to work for nothing / Let’s go to Tyler’s house and waste some air…” It’s tragic and yet telling of many of this new generation growing up without a direction. The music injects an urgency lost in the words.

“Clarity” is my favorite song on the album. There’s a beauty to the almost haunting synthesizer melodies and voices that reminds me of the hopeful nature of music I listened to in the ’80s. But again the lyrics call out a moment of clarity in the darkness – “Cover up my eyes / The tint is dark / So no one sees their shit fall apart…”

And “As Seen On TV” compares life to what’s on television and wondering if we’ve become jaded by all the violence. “Not death, life, birth, or pain / Can shock us now, we’re all the same / And now, or then, we’re jaded” they sing “It’s the man with the gun pointed at my chest / A whispered threat under his breath and I know / It’s just as seen on TV…” With another generation raised in front of the tube, can any of us be surprised or affected by the violence in the world? If it happens to us, do we see it as real or break it down mentally as though “this doesn’t happen in real life, just on TV”…

White Apple Tree not only creates great electronic-based music, but lyrics that make you think. Social commentary and music have always gone hand in hand. Is it enough that young bands like WAT try to inject their passion and observations of the world around them into their music? Velvet Mustache is an awesome mix of music and introspection I hope to hear again soon.

For lyrics and more details about the band, be sure to check out their website at WhiteAppleTree.com.

p.s. Pick up Velvet Mustache below!