Having never experienced Todd Hannigan’s music, I was in for a pleasant surprise when it arrived. Starting with “Playas” I was drawn into a miasma of guitars and lyrics that has kept me entertained for most of the last couple of days. The title track of Volume 2: Courtside for the Apocalypse brings new meaning to the end of days. If I was going to watch the world come to an end, I’d want Todd and the band to be there simply jamming the time away. It’s a call for everyone to take notice of world events and take part, rather than simply having courtside seats for the apocalypse. But if you’ve got seats to the end of the world, you might as well enjoy yourself when you get there.

I would liken Todd & The Heavy 29’s music to a mellow mix of Jack Johnson and Dire Straits. His laid back, surfer dude approach to life (focusing on his life of music, travel, and surfing) is immediately apparent when you hear the strains of the song “Heavy 29’s,” which beautifully sums up their view of the world. “Life can get expensive when it’s always a Friday, benders ramble on when it’s going my way…”

The song “Maybe” calls to his restless, traveling spirit. “Gonna follow my stars… gonna follow the lights” Hannigan traveled the globe in the 1990s into the early 2000s, exploring Australia, Indonesia, South America, and elsewhere. But Ventura, California, where he went to High School, served as a base when he ran out of money. Traveling and working odd jobs, he explored the world, finding the inspiration for songs and bringing it back to eventually share with the rest of us.

As you listen to the album, you can’t help but start wondering about your own place in the world. He says in “Still in Your Heart” — “A lot of people going through the motions, and hoping for the best…” All of us are guilty of this to some degree. Each day bleeds into the next, just part of the formless mass of humanity trudging through the world. With the woes of the world all screaming every day, it’s easy to close your eyes. But we must follow our heart and do what we know is right. Keep hope alive.

Each song merges melody, beat, and rhyme to find a mellow balance to share the message. But Todd and the Heavy 29’s can rock it out too, like “Weight of the World”. “Cause the weight of the world is getting heavy, try to relax but my mind won’t let me… up in the mountains finding total zens, gotta align the chakras every now and then… now I’m hanging tough with the Dalai Lama, join the Heavy 29’s, you know you wanna…” This has to be my favorite song on the album next to the title track. Give it all up, go to Tibet, and find total Zen. Sounds good to me.

Though Hannigan has spent much time traveling, playing, and surfing, his music has been featured in numerous surf films/documentaries, including “Thicker than Water”, “September Sessions”, the score for “Sliding Liberia” (which won “Best Soundtrack at the Alma Surf Festival in Brazil), “Wave Riders” (won an “Audience Award” at the Dublin International Film Festival in Ireland), and he was co-producer/musical director for “Majini” (which won “Best Short Film” and “Best Experimental Film” at the New York Festival).

For the last eight years, Brotheryn Studios in Ojai, California has been a home where Todd has been recording his own albums and film scores. He’s a partner and helps operate the studio, where he’s also recorded albums for a number of well known artists including Jack Johnson, Colbie Callait, and Kenny Loggins.

We can only hope that Hannigan’s travels (“Gotta hit the road ’cause my gypsy heart is burning…” as he says in “Weight of the World”) generate another crop of amazing songs like this album. Each has a message, but it doesn’t get in the way of the music.

Be sure to check out Volume 2: Courtside for the Apocalypse from Todd Hannigan and the Heavy 29’s at Amazon when the album is released digitally on November 18.

p.s. Pick up this album on November 18th as MP3 downloads from Amazon, but in the meantime pick up Volume 1: 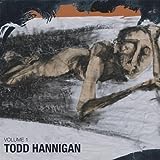