Christopher Guest has a permanent place in my DVD collection on This Is Spinal Tap, the premiere rock mockumentary of the 1980s. Rob Reiner, Christopher Guest, Harry Shearer, and Michael McKean will forever echo in my brain with the strains of Stonehenge. So when I heard that he had a new music effort out, I was immediately drawn to it like a moth to a flame. And though Spinal Tap may not be playing on the album, the Beyman Bros have something just as cool to give the world — an amazing musical landscape. No voices, just instruments on Memories of Summer as a Child and these guys can play!

This group of unrelated musicians makes up the Beyman Bros – David Nichtern on guitars (acoustic and electric), Christopher Guest on a variety of instruments (mandolin, mandocello, clarinet, and occasional guitar), and CJ Vanston on everything else (accordion, synthesizer, acoustic and electric pianos). And it’s one heck of a collaboration.

It’s not what I expected. It seems sort of a combination of jazz, folk, and celtic influences jived together to create eleven tracks that don’t fall into the trap of becoming elevator music. They work in highs and lows, key changes, a bit of improvisation, and such a cool array of instruments that you can’t help but tap your toes. (Or at least I couldn’t help but tap my toes.)

The mix of styles and musicians is really what makes this instrumental album work for me. The “smooth jazz” album has grown a bit stale over the years for me. I enjoy a fusion of styles and an upbeat tempo more than the typical sleepy, bedroom jazz I tend to hear on jazz stations on local radio stations. As such, I find myself avoiding them.

But I watched a video of these guys playing together and was immediately entranced. It was the video of the group playing “Moon of Tunis” that threw me over the edge. Once I saw them enjoying themselves in this upbeat tune, I couldn’t stop tapping my toes. They get into a groove and don’t fall out. For me, nothing beats watching a bunch of musicians having fun. Live music beats anything recorded. But watching them play brought that “fun” out for me.

The album as a whole is an eclectic mix, but that’s what makes it so alive for me. It doesn’t just sit there and expect you to go to sleep. It has a pulse. Feel it beat?

And from the first song, “Tulong”, I fell into the groove and then just wound my way from track to track as they led me where they wanted me. After “Tulong”, “Triad” swallowed me up with eclectic electric guitars that lead to so much more… almost telling a story via the layers of instruments and styles. “Hidden Passage” made think of Spyro Gyra, one of my favorite jazz fusion groups growing up as a sax player. And “Awakening” serves as the mile marker at the end of the journey, as though I was in a meditative trance for the last 10 tracks, bringing me back up to the land of conscious thought.

It really does hit me like a trance album — a meditative journey. But not like any have heard in recent years. It’s nice to know that the pacing/arrangement of an album is still an art form.

If you like calm but energetic instrumental music, Memories of Summer as a Child from the Beyman Bros is an amazing entry. Not elevator music. Not smooth jazz. But something much more. Check out the video link above and get a taste for the rest of the album, but I think you’ll like it. Christopher Guest and the gang did an amazing job.

Be sure to check this one out at Amazon or elsewhere… It’s worth it!

p.s. Pick up the album at Amazon here: 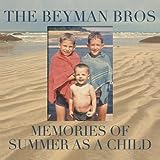