Once again, a fusion of musical styles strikes when I least expect it. Never in my life have I heard a Michael Jackson song done as a jazz tune. And that was just the start of this strange journey into the world of J.Viewz. It’s like stepping into a pool filled with color. Each song lays out just so with elements of electronica, jazz, unique vocals and keyboards, all seamlessly blended together.

Jonathan Dagan established J.Viewz while working with his band Violet Vision on their 2nd album back in 2002. Muse Breaks, Dagan’s first album with the group, was released worldwide in 2005 by Deeplay Music. Since then, it doesn’t seem like he’s taken much of a breath, working to create remixes with artists like Nina Simone while producing soundtracks for the BBC, National Geographic, Fox Kids, and Discovery channels, while touring to support J.Viewz. Though Dagan hails from Israel, there are definitely no language barriers for his music as it travels the world.

The Besides EP was released overseas in 2008 and is just gaining ground in the U.S. with tour dates at the Blue Note Jazz Club in New York City and the Bohemian Caverns in Washington, D.C. in November.

The EP starts off with a jazz cover of Michael Jackson’s “Smooth Criminal” which absolutely snuck up on me. As a child of the ’80s, I certainly had heard the original version but somehow must have blocked the lyrics from my mind. So when I heard the vocals of Noa Lembersky I simply got lost in the song until I heard “You’ve Been Hit By / You’ve Been Hit By / A Smooth Criminal”. After that I was just along for the ride.

Each song grooves right into the next, smoothly transitioning us through a jazz landscape I wouldn’t mind exploring for a while longer.

The band is made up of Dagan, who handles production, the computers, and turntables; Lembersky on vocals; Urijah on vocals and guitar; Eran Asias on drums; and Daniel Koren on keys. As a lifelong fan of jazz, especially where a fusion of rock sensibilities is mixed in, I have to say I love their style. They manage to bridge multiple gaps without missing a beat.

When the last strains of the live version of “Under the Sun” ends and the EP fades away, I immediately started it over again not wanting it to be over. Lembersky’s sultry vocals with the horn, bass, drums, and the ’70s guitar in the background had a groove that didn’t want to let me go. These guys must be a joy to see live.

If you want to hear more from J.Viewz, check out their MySpace page and look for The Besides EP. It’s worth more than one listen if you like jazz.

p.s. Check out other J.Viewz albums: 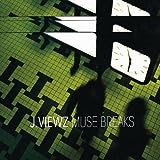