As a child of the 70s with parents who listened to folk songs, I often fall back that musical orbit. And lately I’ve been encouraged by the new artists who bridge the gap between traditional folk (even down to some of its Bluegrass and Blues roots) and rock-and-roll. With artists like Wes Kirkpatrick, the Indigo Girls and Matt Duke, I’m able to enjoy folk music while not giving in completely to my folkie roots. (Yes, it’s a minor rebellion but I’ll accept that!) 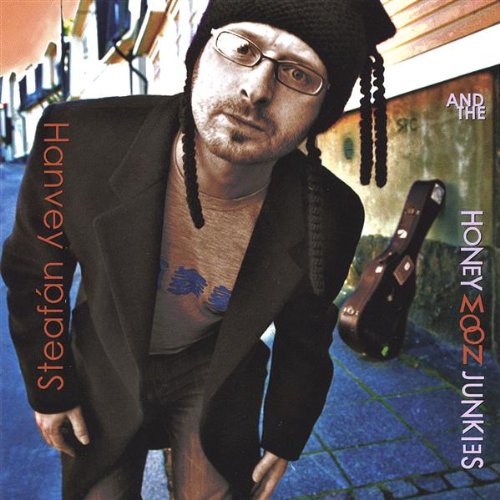 But let me introduce you to Steaƒán Hanvey. Hailing from Dublin, Ireland, he brings a gift for rich arrangements, storytelling, and a voice you want to believe has lived those stories. As I listened to Steaƒán Hanvey and the Honeymoon Junkies, I was reminded of other artists such as James Taylor and Donovan as well as more modern folks like David Gray and Matthew Mayfield. His easy style with lyrics and guitar make him seem very genuine. I suspect that if I get a chance to listen to Hanvey live, I’m not going to want the concert to end.

Steaƒán Hanvey and the Honeymoon Junkies was released in Europe a while ago, but is just now coming to the U.S. Hanvey has even moved here to focus on building an audience while traveling back and forth to Ireland occasionally. Over the last 3 years, he’s also been working on his sophomore album called Nuclear Family that is due out in 2012. But don’t let that stop you from checking out Honeymoon Junkies.

What caught my attention while listening to the Honeymoon Junkies is the effortless way Hanvey tells his stories and finds just the right musical style to go with it… It starts with a simple rhythmic guitar intro in “Rooms,” transitions to the upbeat ballad “My Woman (Ode To You),” moves to the anthem-ish “Love’s A Decision,” flows through the hard-edged “Desperation,” and eventually ends with the James Taylor-ish “Show Me”…

And as I listened, there were more than a few that I’d have to tag as favorites, the first of which being “Love’s a Decision.” This one should be required listening at any couple’s therapy session. “Love’s a decision between you and me / not some half-baked scene from a movie screen… if you want it to last / you’d better let go of the past.” And I don’t know who’s singing in the background, but she has an amazing voice that completely complements Hanvey’s with the anthem guitar riffs and solid bass/drum beat.

“Fair Weather Friend” on the other hand feels like something from Colin Hay and I love the guitar riffs. This one tells the story about a guy who lost his way, finds his way back again, only to wonder how others see him. I interpret the story as someone coming back from alcohol or drug use and finding that some folks don’t like who they see when someone is sober. But I’m thankful whatever Hanvey’s story is for this song, that he came back with a “head full of songs” as he says. And I hope when something happens to me or someone else I’m not a fool or a fair weather friend… sticking through thick and thin.

In “Desperation,” he breaks the song mold a bit and it works. It starts with a vaguely Australian/digeridoo-ish funky beat that leads to a story about a relationship gone wrong. This is a darker tune telling the story of a man who knows it’s over, but she’s the one pulling away. “You will blame me and you’ve tried to shame me / What more could I do…” It’s interesting to me that it feels vaguely uncomfortable to listen to this one, like we’re voyeurs in some lover’s quarrel.

Check out the video for “Desperation”:

Then he turns it completely around with a tune you can’t help but smile while listening to… “Everything’s Happy” shifts to everything bright and cheery, but it has a hidden message. The rhythm of the guitar along with the acoustic bass in the background keeps it light and moving along quickly where you hardly have time to think anything but happy thoughts… “The sun changed it’s mind / decided to shine on my day / The girl on the street never misses a beat and she smiles as I catch her eye…” And a bit later there’s the dark side: “Everyone’s happy / Everyone’s ok / Everyone’s looking for someone to blame.”

Steaƒán Hanvey has a way of making the music fit the lyrics that isn’t forced or created by some crowded room of movie producers. Every song on Steaƒán Hanvey and the Honeymoon Junkies tells a story and I for one enjoyed the ride. I’m already looking forward to his next album – Nuclear Family – sometime next year! For tour news and everything else Hanvey-related, be sure to check out his web site SteafanHanvey.com.