Every now and then I come out of my cave and find a new band to soak up… Slightly Stoopid came on my radar back at the end of 2008 when I heard the tune “2AM” online. “2AM” is on their 2007 CD Chronchitis. I liked what I heard, so I got a copy of their 2008 album, Slightly Not Stoned Enough To Eat Breakfast Yet Stoopid. I am now a fan.

As I listened to Slightly Not Stoned Enough To Eat Breakfast Yet Stoopid, I was almost mesmerized by their groove. Most songs have a reggae/blues beat that just flows seamlessly from one tune to the next. None of the songs is particularly long (the longest being a bit more than 5 minutes, the shortest a bit under 2 minutes), but they all feel organic. And in a musical market that is full of imitators (for good or ill), it’s nice to hear songs that aren’t forced to be something they’re not.

Slightly Stoopid released their first album in 1996 and have shifted members from time to time, but the constants have been the band’s founders – Miles Doughty and Kyle McDonald. That duo share vocal, guitar, and bass duties. Right now the rest of the band includes… Ryan “RyMo” Moran on the drums. C-Money on trumpet and keyboards. De La on sax and Oguer “OG” Ocon on congas, percussion, harp, and vocals… It’s a great mix of guitar, horns, percussion, and keyboards. And they make it sound so effortless!

The band has been playing more than 200 shows a year to keep their fan base strong and growing (affectionately called the “Stoopid Heads”). And to do that, and keep control of their music, they turned down major record label deals. With their own label now, they’re in control of their own futures.

My favorite songs on the album are “Thinkin Bout Cops,” “Circle House Blues,” “Train 1,” “Train 2,” and “Sensimilla.” But the whole album has a life of its own as it grooves along. I can see this playing in the background at a swingin’ party. The variety of styles the band can play is insane. Add “Closer to the Sun” to my favorites list too — which proves they can even play unplugged. The band does not lack for talent.

Evidently the band’s earlier records had more of a punk feel, so how they’ve morphed into the reggae/blues/rock band they are now is beyond me. But band members are evidently very laid back, even engaging in some smoking and drinking to keep the vibe going. That’s why it’s fun to hear songs like “Train 1” which has a more up-beat almost punk vibe.

Though their recent tour didn’t bring them anywhere near me, I might have to go pick up Chronchitis to hear a different side of the Slightly Stoopid group! It’s definitely on my list of fun party music. If you like independent reggae/blues from a very talented group of guys, be sure to check out Slightly Not Stoned Enough To Eat Breakfast Yet Stoopid. It’s worth your time!

Be sure to check this group out. It’s worth the listen!

p.s. Pick up this album at Amazon or your favorite retailer: 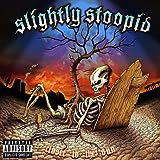 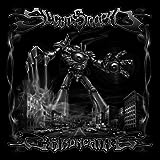