In January 2009, Sara Lov released her first album with Nettwerk. The Young Eyes EP introduced the rest of the world to her unique style. Until recently she was part of the band Devics, a popular group in the UK. Stepping out on her own to release her solo work is a bit scary, but she’s taking it in stride. “I learn every day and doing scary things makes me grow,” Lov says. 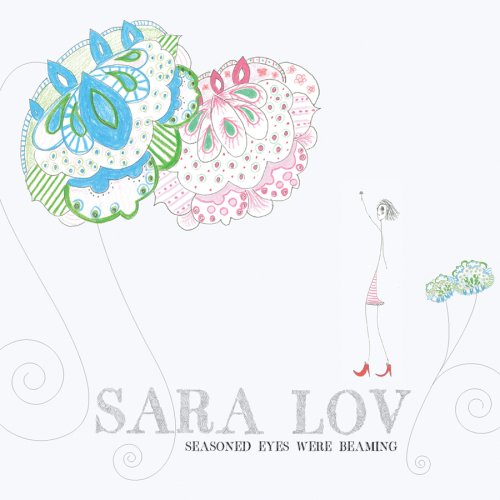 Her EP included five songs, two of which also made it onto her full-length album released this month. Lov’s songs are simple and weightless, yet infused with a depth most first time solo artists can rarely reach. Her voice embodies a pure sentiment in its sometimes shaky lilt as it lifts the listener through the stories woven into each tune.

So now in March 2009, Lov releases her first full-length album titled Seasoned Eyes Were Beaming and you can tell her confidence continues to build as a solo artist. The arrangements continue to grow as she adds layers of instruments such as cello, ukulele, pump organ, and celesta to support her already distinct voice.

Produced by Zac Rae (Fiona Apple, Annie Lennox, My Brightest Diamond) and mixed by Darrell Thorp (Radiohead, Beck), Lov is joined by cameos on the album from Alex Brown Church (Sea Wolf) and Solon Bixler (Great Northern) as she weaves her tales of innocence and the idealism of youth. We all know that as we get older it becomes harder and harder to see things with “new” eyes and Lov tries to recapture some of that innocence in her lyrics and music.

With each song, she weaves a narrative that can be interpreted many ways. I think that allows the listener a chance to filter the music and words with their own thoughts and memories and make it their own experience. Poetry is like that. It’s a performance captured on paper that can be experienced again and again in different ways because you’re never the same as the last time you read it. Lov’s lyrics hit me in that way.

“Just Beneath the Chords” starts Seasoned Eyes Were Beaming with an interesting twist, using the senses to tell a story I don’t quite now how to interpret. Each time I listen and read the lyrics I come up with a different interpretation. I think iIt’s a cautionary tale about how you can’t ever really know something until you experience it. Lov sings “now the star that shines us / it burns and blinds us / wherever we move / notice how you love the blindness / the burn reminds you / that you can feel too”. An experiential poem if ever there was one, as you listen with your ears and the song talks about your other senses along the way.

One of my favorites on the album has to be “New York,” which is a tale of friends parting and finding it tough to find common ground… “we spoke of the long ago / promised each other we’d never get old / but that was a whole life ago / and now I’m on my own…” The piano and acoustic guitar create an almost haunting feel to this song as though it’s full of ghosts. The video for “New York” has been uploaded to YouTube and it’s one of the most interesting music videos I’ve seen in recent memory, reminding me of some of the early days of MTV with Peter Gabriel and Dire Straits. (You can see it yourself here.)

My other favorite on the album is “Animals,” which Lov describes as a breakup song. Though I’m not sure I agree, it’s definitely about a dysfunctional relationship… “I should have never let you in to me / but I never never learned to swim / until you came around and pushed me in”… It’s a duet between Sara Lov and Alex Brown Church with simple, happy guitar picking in the background as they debate what kind of animal they are to treat each other as they do.

I would be remiss if I didn’t also mention the intriguing art of the album itself, which is used to great effect in the video for “New York” mentioned earlier. Colorful, simple drawings reinforce the fact that the album is about innocence.

For an artist new to solo work, I must say that Lov has it down from the start. Most seasoned solo artists would dream of a first album like Seasoned Eyes Were Beaming. Nettwerk has another winner to add to their impressive retinue of artists.

Be sure to check this one out at your local music store or online.

p.s. Pick the EP and album up at Amazon! 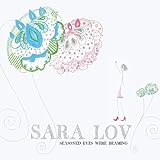