To be moved by music is a wondrous feeling. Whether you are moved to feel, dance, sing, or play, there is something about music that reverberates through each of us. And even in a world feeling lost and afraid in the face of global changes, music is one thing that can bring us together. 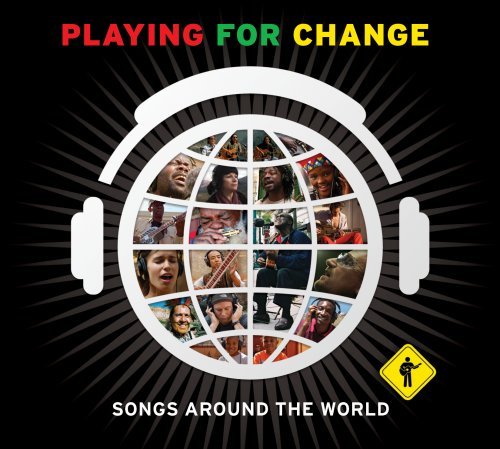 Add to that the need to keep music alive and you find a group of people doing some remarkable things around the world. Even in the midst of poverty, war, or famine, the Playing for Change Foundation aims to share more than the music of the many musicians they have met during the course of their travels. They are building music schools so that these gifted artists can pass along their skills and passion to the next generation so this precioius resource is not lost.

The Playing for Change: Songs Around the World album is part of a multimedia effort to inspire, connect, and bring peace to the world through music. Using a mobile recording studio, a group of people traveled wherever the music took them. This is not a political or spiritual missoin, but an artistic one with the goal of helping people see that music can unite us as a people regardless of ideology, location, or religion.

Traveling to such diverse locations as Santa Monica, California, and Barcelona, Spain; Johannesburg, South Africa, and Kathmandu, Nepal; New Orleans, Louisiana, and Jerusalem, Israel; these people, led by Mark Johnson and a crew devoted to the singular mission of spreading peace through music. They found musicians in the United States, Europe, Africa, India, Asia, and the Middle East and recorded them live using their mobile equipment.

Songs Around the World includes a CD with ten tracks, from the classic “Stand by Me” and Bob Marley standards as “One Love” and “Don’t Worry” and the Hindi song “Chanda Mama”. It also includes a DVD with videos of five of the songs on the CD.

Though the CD is amazing and I don’t want to downplay its significance, it’s the DVD that really touched me.

Several months ago I first saw the video for “Stand by Me” on the web as the project was starting to get the word out. I remember it vividly because it touched an emotional bone in my body that hasn’t been touched for quite a while. Each of the artists who performed on the song added a bit of their indomitable spirits to this song, from Roger Ridley on the street in Santa Monica, CA, to Sinamuva outside in Umlazi, South Africa, to Clarence Bekker in Amsterdam, Netherlands, and everyone in-between.

And if you think about the technological feat it would be to not only record each individual performance, but then turn around and make different parts available for the rest of the artists to listen to while performing, it’s a huge undertaking. Think about the challenges of recording in wide open spaces, in the middle of a crowded area, or inside a building – none of which were ever meant to record audio in, let alone record it cleanly. Then add to that recording video of each performance and then weaving the performances, both video and audio, into a complete whole and balancing tracks.

Each of these videos is a work of art that faithfully weaves the lives, passions, and music of the artists into a tapestry of sight and sound. And though “Stand by Me” is still my favorite, as it was my first taste of this project, “War/No More Trouble” and “Don’t Worry” are my other two favorites out of the five videos available.

These amazing artists around the world were brought together virtually, proving once again that the world is getting smaller every day through the use of technology.

Through music, perhaps our world will one day find peace. Please keep that hope alive. Buy a copy of the Playing for Change: Songs Around the World CD or better yet, donate to the cause at the Playing for Change Foundation website. Join a movement and help this music touch more peoples’ hearts around the world.

p.s. Pick up a copy of the Playing for Change: Songs Around the World CD/DVD at your local music retailer or online: