Branford Marsalis. I’ve known about this talented saxophonist since 1985 when Sting’s album Dream of the Blue Turtles was released. At the time, I was in a jazz band playing alto saxophone and we had all been introduce to Branford’s brother Wynton (amazing trumpet player) by our band leader, a trumpet player himself. But when I heard Branford playing on multiple tracks with Sting, I knew I must be playing the right instrument.

Since the early ’80s, Branford Marsalis has been either performing with his own group, playing backup for a variety of amazing artists (including as Sting, Harry Connick Jr., Tina Turner, Bruce Hornsby, the Greatful Dead, Crosby, Stills & Nash, and others), and even worked as the leader of The Tonight Show with Jay Leno band for a few years. He’s been a busy, busy man.

His last album, Braggtown warranted multiple Grammy-nominations and he and his quartet toured worldwide for two years before returning to the studio to begin work on Metamorphosen. “Metamorphosen” is the German word for “metamorphoses” was chosen to represent the growth and development of the band as a group and as individual members. Marsalis and his band have been together for more than 10 years, and you can tell just by listening that these guys enjoy playing together. Branford plays the soprano, alto, and tenor saxophone and is joined by pianist Joey Calderazzo, bassist Eric Revis, and drummer Jeff “Tain” Watts.

Metamorphosen features original works by each member of the quartet and they play a little bit of everything from the world of jazz — from the jazz of discord to quiet ballads to the standard jazz of greats like Thelonious Monk. Jazz is a style of music that takes many different forms. And each member definitely puts his own stamp on his songs.

The album starts with “The Return of the Jitney Man,” which sounds like classic jazz to me with a few strains of “Flight of the Bumblebee” woven in for good measure. Written by Watts, the song travels at a brisk clip driven by quick sax licks and a steady beat.

Though the whole album is amazing, I felt more connected to the slower songs such as “The Blossom of Parting” and “The Last Goodbye” (both written by Calderazzo). The slower tempo brought me into the music much more, as I felt I had more time to experience the melodies, which sometimes get lost in songs like “Jabberwocky” (written by Marsalis). “Samo” (written by Watts) hit me the same way as the other slower tunes, but with a standout baseline in the background.

But the quartet’s version of Thelonious Monk’s “Rhythm-A-Ning” was the highlight. With tempo changes throughout, it must present a challenge to even this set of talented musicians. They flat out fly through the changes without dropping a beat. Such talent is hard to come by except by hard work and practice, which these guys obviously have in abundance.

If you haven’t listened to Brandon Marsalis for a while or are interested in the latest sounds of the jazz world, I can’t recommend Metamorphosen highly enough. As jazz quartets go, these guys are amazing.

p.s. Be sure to check them out at your local music store or Amazon: 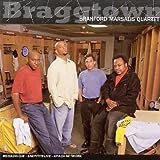