In 2009, I heard Matt Duke‘s music for the first time. With one song from his acoustic album – Acoustic Kingdom Underground – he made me a fan before I heard anything else. That song – “Kingdom Underground (Acoustic)” – merges the beauty of Miltonesque poetry, a beautifully simple pick and strum pattern on an acoustic guitar, and his amazingly expressive voice as it builds and builds. Instead of justifying God‘s side of the story, Duke rewrote it from the Devil‘s standpoint. The Fallen waits for the seventh day when God takes a break. “Evil hides amidst the shade / Evil keeps for evil changes… Woman, please / I can give you what you need / All the answers that you seek / Just pick the fruit right off the tree…”

Since then, I’ve been eagerly waiting to see what Duke’s passion would create next. I listened to the non-acoustic version of Kingdom Underground and was fascinated by his social commentary and the lush arrangements. Most of all though, it was his passion that was evident in all he did. Where would he go next?

I was pleased to see that in One Day Die, that social commentary weaves all the way through the new album. Lost youth and innocence is just the beginning. Could it be the current economy and job market? The lost hopes and dreams of generations young and old? What motivates him to write these impassioned pleas for hope and justice in an imperfect world?

Whereas it was the clean acoustic arrangements that attracted me to his music initially, in One Day Die it’s the mix of acoustic, pop, and rock that conveys yet another level of sophistication this time. Even his use of distortion is a deliberate twist used to illustrate a point in “Kangaroo Court.” He doesn’t overuse such artistic license however, keeping many songs with clean arrangements and beautifully simple musical choices. The duet in “Love You Anymore” weaves guitar, piano, and a steady beat to build and build. Harmonies and intertwined messages speak to the strained feelings of a relationship.

Each song tells a tale and the tales vary widely, from love and broken hearts to life’s injustices. Styles are used not just to offer a soundtrack to the stories, but to reinforce the feel Duke was going for.

Like with “Kingdom Underground,” the lyrics for “Kangaroo Court” tell of Duke’s intelligence behind the scenes. Not only can he perform with passion and talent, but his social commentary cries out amidst the distortion (like he was singing over a loudspeaker or bullhorn)… “It is not your fault / it doesn’t matter / You say objective? I think I know better / You people keep swapping one agenda for another / Give them what they want / it doesn’t matter / I’m in a kangaroo court…” This could be applied to damn near any political scenario we face today and far too many lawsuits clogging our courts.

He follows that up with “Love You Anymore,” which is completely different. A piano and vocal duet with Cara Salimando, this song speaks eloquently about the end of a relationship. “There are two that lie beneath these sheets / it might as well be three with all of the space between… I said ‘I love you’, though I knew I didn’t love you anymore…” A very different Duke here, telling of two lovers drifted apart but not yet aired their decisions to the other. The piano, drums, and guitar along with the pairing of voices tells the story as much as the words themselves.

And “Needle and Thread” tells the story of a road trip to reclaim old glories and heal a broken heart. “For now, the waking world can wait / so sing your blues away / and hope for better days. / Pick an old song and we’ll dance in the dark / it’s that needle and thread to stitch up my broken heart.” This is an upbeat rock anthem I can imagine being heard on many a road trip as we go seeking to fill in the holes left behind by loves lost and the potential of decisions never made.

These three songs “Kangaroo Court,” “Love You Anymore,” and “Needle and Thread” for me show the growth of Matt Duke over the last few years. These are songs sung with passionate about experiences he’s had along the way and they’re just the tip of the iceberg for the album. But though he’s gained experience, he hasn’t lost his talent for weaving intelligent lyrics and different musical styles to tell his stories like a troubadour of old. One Day Die is a great journey from tale to tale and I hope Duke continues to tour, live life, and tell these stories for years to come.

p.s. Pick up these great albums below! 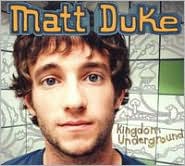