What seems like a lifetime ago, I discovered the Indigo Girls at the tail end of college. Rites of Passage and Nomads Indians Saints started off my love of this folk music duo made up by Amy Ray and Emily Saliers. I wore out my Swamp Ophelia tape in an old Walkman tape player when I was regularly walking around the Denver Tech Center near Fiddler’s Green Ampitheatre (which has since gone through a few name changes and is currently Comfort Dental Ampitheatre). I saw them perform at Red Rocks Ampitheatre in Morrison, Colorado, and at least one other venue in Colorado.

But like many easily distracted music lovers, I kind of lost track of Amy and Emily after a while. I have picked up most of my favorite albums on CD over the years and every once in a while have checked in to listen to their latest releases. And though occasionally I heard glimpses of some of what made their earlier albums amazing, through the tinted lenses of experience – both theirs and mine – I was never as caught up in the melodies, words, and harmonies as I was with songs like “Galileo,” “Closer to Fine,” “Pushing the Needle Too Far,” “Prince of Darkness,” “Strange Fire,” “Ghost,” “Mystery,” and “Kid Fears.” 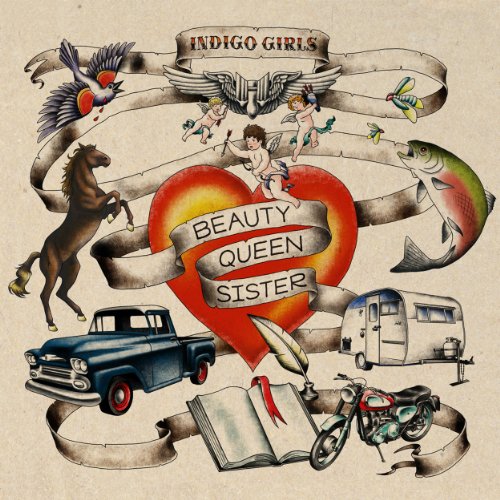 Fast forward to this year – 2011 – and their 14th studio album Beauty Queen Sister. Featuring thirteen new songs in their signature storytelling style. They definitely haven’t lost their touch in creating simple yet complex arrangements, melodies, styles, and harmonies to suit whatever topic they choose to focus on. And those topics vary widely on the album, including my favorite on the CD – “War Rugs,” written about the 2011 Egyptian revolution. Their attention to causes both here and abroad hasn’t let up in the slightest, including support for saving the environment, the rights of Native Americans, and the LGBT rights movement. So support for the Egyptians’ brave stand against a corrupt government fits right in with their strong support for equal rights for all.

Though they’re just as capable of rocking the house as singing a gentle song, I tend to like their softer side. On Beauty Queen Sister there are three songs that fall into that category with different styles.

I already mentioned “War Rugs,” which is about the mostly non-violent revolution in Egypt that began in January 2011 and whose efforts continue today. Seeing the hundreds of thousands of protesters in Tahrir Square on the television news this past January and February was amazing. And obviously it wasn’t just those in the Middle East who were affected, with the continuing revolution in Libya ousting Qaddafi and the other areas affected by the “Arab Spring.” Amy and Emily’s song highlights the lasting effects…

“We’re all growing up together / We’re all making a mark on it. / We’re all damning the consequences. / I want to understand / the soul you have in there / Young Egypt seized the moment / and brought that bastard down / You’ve got technology / And you’ve got archeology / We treated you like punters / until you kicked the goal / now we’re claiming you for our team / ’cause what do we know?”

Freedom is one of those things we have to all tend to or it gets taken away in dribs and drabs until it’s gone. I think that’s the “team” we’re all on. And that struggle for freedom is happening even within our own country. Just ask the people with lifestyles not “sanctioned” by certain parts of the population. Couldn’t we all do with a bit more tolerance and brotherly love?

Also among the softer songs on the album is “Birthday Song.” And it’s a sentiment I often have. “I couldn’t think of a thing to write / on your birthday card / considered the poets / they didn’t know what lay quiet inside my heart / thought of Atlanta / thought of Toronto / all of the places we’d been…” But nothing comes to mind to write down. Instead, I hope my actions speak louder than words and we can share those together. What a wonderful sentiment. Words sometimes seem so hollow and given the chance we should all be happy to share time with one another.

“Damo” is sort of halfway between soft and loud, with its Celtic feel. And it makes me want to get up and jig. Nobody wants to see that, but it’s impossible not to feel like dancing. I think it owes that dancing spirit to Eamonn de Barra’s whistles and flute and the full-throated backing vocals of Irish singer-songwriter Damien Dempsey in the background along with the spritely rhythm guitar and the beat of the bodhran (Irish Drum).

Beauty Queen Sister mixes the soft, loud, and energetic sides of the Indigo Girls and should make fans sit up and take notice. It’s available at your favorite music store now, so I’d encourage you to give it a listen. If you want more info about the album or anything else you want to know about the Indigo Girls, you should also check out the Indigo Girls home page for biographical info, tour details, albums, and more!

This article first appeared in a slightly different form at BlogCritics.org here.