It never ceases to amaze me when I hear a band go acoustic and it sounds just as good as it does electric in a studio. Unfortunately in an age when everything in the Top 40 seems over-engineered and artificial, these bands are the exception, not the rule. So when I find one, I’m ecstatic and want to celebrate that success.

Back in June 2010, I reviewed the album Neon Lights from Frank Viele & The Manhattan Project. This is a six-piece band based in Connecticut that sounds much larger than just six people, largely because they have a horn section – which you hardly find with any group these days (the Dave Matthews Band is the only other similar band I can think of). Their music is a mix of rock, soul, and blues that simply works. When I listen to them on CD, it’s a group I’d kill to listen to live. And after hearing Acoustic Vudu, I think I’ll have to double the bounty. 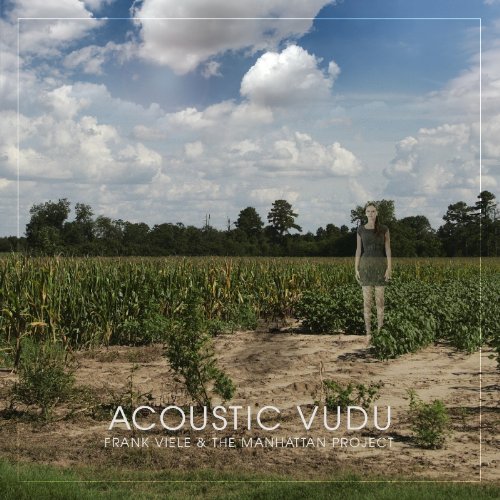 Acoustic Vudu is a five song EP of tracks that includes two new songs – “Push and Pull” and “Spanish Fly” in addition to acoustic versions of “Neon Lights,” “Somebody Else,” and “Try.” These tracks only reinforces just how good these guys are. Though these songs all sound great loud, proud, and plugged in, there’s a purity in hearing the instruments without that electric boost. Every song shines acoustically because you can hear the quiet moments just as well as you can the full moments. Words, finger picking, horns… it all layers and never reaches the frantic levels being louder can sometimes bring into play.

All the songs are amazing, but I’ll pick out three that really stick with me.

With “Neon Lights” the guitar lick still has just as much power as it does in the electric version, but I love that they’ve slowed it down a bit and let the horn section shine. The sax and muted trumpet set things up with a beautiful quiet as the song starts to build and build. And one of my complaints with Neon Lights was that sometimes Frank Viele’s voice was too gravelly and stressed to understand what he was singing. Without having to compete with the amplifier, Frank’s voice just works. It tells the story with a breathless growl driven by the guitar that doesn’t let up…

“Push and Pull” is another song that just grooves… “Don’t want no lover standing in my way / You find it hard to sit and stay / And I know inside you know it’s true / And every time you leave you know you’re through…” It’s about a relationship where both people have a certain gravity and each is pushing and pulling the other even though every time they part may be the last. And this one has some great guitar, both lead and rhythm – each expressing a different emotion along with Frank’s vocal… And I love the “Come on my baby / Come on my darlin” section as the singer pleads with his love.

Lastly, “Spanish Fly” just has some gorgeous guitar parts. I’m a sucker for great guitar. This one again tells a story of passion between a man and a woman where the guy is wondering if the relationship has gone beyond lust. It goes on for more than five minutes and I bet it could go on for another five and I wouldn’t mind…

What more do I need to say? If you’re looking for a new group to groove to, Frank Viele & The Manhattan Project should be right up your alley. And when you’re done with Acoustic Vudu, check out Neon Lights for more groovy goodness. Both albums are available now. For more details, check out the band’s website at FrankVieleMusic.com and look for them on Facebook and YouTube!