For those of you who don’t know Frank Caliendo, he’s become quite a star in the stand-up world with his television show Frank TV and his very popular stand-up routine where he does amazing impressions. If you’ve never seen or heard him do his John Madden impression, you’re missing something. He’s spot on. And he bounces between Al Pacino, Jack Nicholson, Chris Rock, and others like it’s nothing. He has to be one of the best impressionist comic I’ve ever heard or seen on TV. 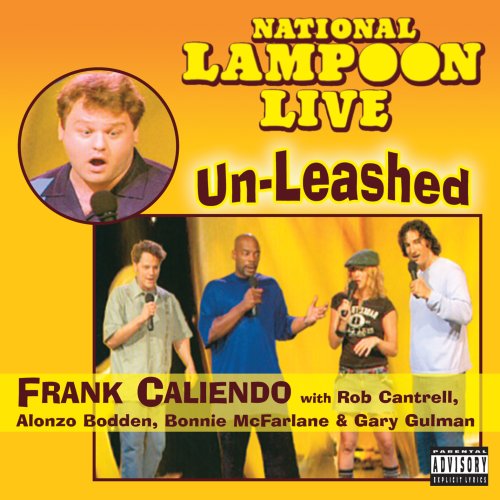 On Frank Caliendo – Un-Leashed, Caliendo headlines and MC’s at the National Lampoon Comedy Club in Santa Monica, California. The CD includes performances from Caliendo, Rob Cantrell (a runner-up on Last Comic Standing (LCS), Alonzo Bodden (a winner of LCS), Bonnie McFarlane (another contestant on LCS, and Gary Gulman (yet another contestant on LCS).

Though Caliendo’s set is great, for the most part it’s bits and pieces of things I’d heard him do elsewhere. Where it gets really interesting is when he mixes in Al Pacino, Don Pardo, and John Madden together… That’s entertainment.

The other comics are a bit hit and miss, as they were for me on episodes of LCS.

Rob Cantrell really pushes the envelope of foul language in the set he does here. And if he was really close to winning LCS the first season the show was on, I’m glad I missed it.

Alonzo Bodden is a very very funny man. He does a skit about going into a Bed, Bath, and Beyond to buy $50 worth of sheets and coming out with $1500 of bedding. What bed needs that much protection? He continues to be a very funny comedian even after his LCS experience.

Bonnie McFarlane and Gary Gulman however weren’t stellar on this CD. Neither one really made me laugh during their time on LCS and their routines didn’t surprise me here either. Gulman is stuck on cookies and McFarlane is stuck on pretending to be dumb.

If you’re looking for some great material from Caliendo or Bodden, this is a great collection. Otherwise, it’s a bit of a wash. And if you ever have a chance to see Caliendo or Bodden live, get out and see them. They’re worth it.

Check out Frank Caliendo – Un-Leashed at your local music store or online! Just keep it away from the ears of children… it’s a bit blue in spots.

p.s. Check this one out at Amazon: 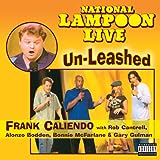