Back in November 2008, a CD was finally released of George Carlin‘s 1984 album Carlin on Campus. The material was taped in April 1984 while he was doing his fourth HBO comedy special of the same name, but the album varies a bit from what was on the HBO special. As with any George Carlin comedy, he tears apart the conventions of society so we can see just how funny we all are. And through his use of language, we see the absurdities of everyday life.

His death in June 2008 was a huge blow to comedy. Without Carlin, many comedians would not have many of the freedoms of speech they enjoy today. He was willing to fight for what was right against the conservative folk who would rather listen to sanitized language than actually have to think for themselves. His seven words sketch opened doors I hope will never again be closed by those with closed minds.

Carlin on Campus brought some of Carlin’s classic routines such as “Cars and Driving”, “An Incomplete List of Impolite Words”, and “Baseball and Football” to an entire generation 25 years ago. And now it can open minds again to the insanity all around us!

The album opens with “The Prayer,” which is like no prayer I’d ever heard. In an age where “mashups” are new and cool, Carlin took a traditional prayer and mashed it with the Pledge of Allegiance and other bits. His Catholic background also allows us to enjoy a quick “Hail Mary“.

“A Moment of Silence” brings us a laugh at the absurdity of a moment of silence before an athletic event at the expense of some poor folks from La Paz who died in a roller coaster accident. It’s as if Carlin saw the movie Final Destination 3 and decided it was ripe for making fun of. I find it nearly impossible to not laugh as the situation he describes gets more and more absurd.

Though there are many other great routines on the CD, it ends with “An Incomplete List of Impolite Words,” which is totally inappropriate for listening to without headphones at work, with small children, or around anyone else you don’t want to offend in some way. I’m getting to age 40 in a couple of years and I have to admit that I’d only heard about half of these innuendoes, suggestive phrases, and flat out foul language before listening to this track… and I still laughed all the way through it. Who thinks of these? Carlin just cataloged them. But other warped minds actually said them first. What other fun phrases are invented every day?

So if you haven’t had your daily dose of George Carlin… Carlin on Campus brings some of the best of his work from the 1980s back to life on CD so you can once again laugh your butt off and learn something along the way. Be sure to check it out!

For another recent Carlin release, be sure to check out my review of George Carlin’s last taped performance – It’s Bad For Ya – here.

p.s. Pick up <em>Carlin on Campus</em> at your local music store or at Amazon: 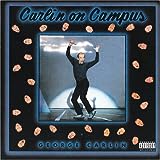 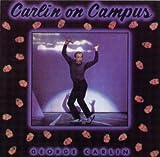