Every year the GRAMMY Awards come around and prove once again that I am listening to the wrong radio stations. The 2009 collection is no different. The 2009 GRAMMY Nominees CD includes an amazing cross-section of the radio waves, some of which I hadn’t heard before listening to the CD! 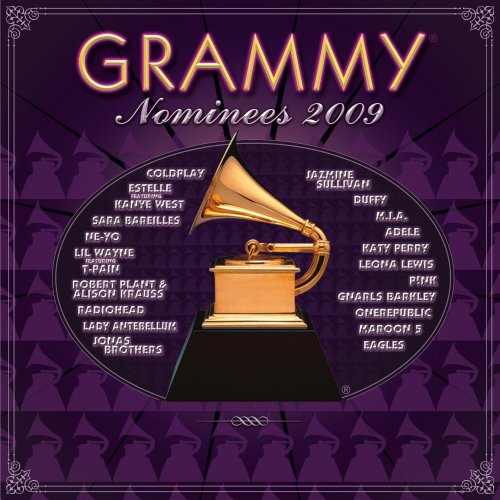 2008 was a great year for pop, rock, and R&B artists across the board, and on February 8, 2009, we’ll know who wins in the usual categories: Record of the Year, Album of the Year, Song of the Year, Best New Artist, Best Female Pop Vocal Performance, and Best Pop Performance by a Duo or Group with Vocals.

Coldplay’s album and song “Viva La Vida” is up in multiple categories, including Record of the Year, Album of the Year, Song of the Year, and Best Pop Performance by a Duo or group with Vocals. It’s amazing how many times I’ve seen amateur renditions of this song on YouTube this year.

Next we have Estelle with her song “American Boy” (featuring Kanye West) off her album Shine. “American Boy” is up for Song of the Year and faces some stiff competition in the category.

After that we have Sara Bareilles “Love Song” released as a single in 2008, which is up for Song of the Year and Best Female Pop Vocal Performance. “Love Song” has received a ton of play on my local radio stations, and I have to admit it’s pretty catchy. I haven’t checked out the rest of her album Little Voice, but hope to do so.

Ne-Yo’s album Year of the Gentleman is up for Album of the Year. You’ll find the first track, “Closer” on the Nominees CD.

And Ne-Yo is competing with Lil Wayne for Album of the Year. Lil Wayne’s album Tha Carter III is represented on the CD by “Got Money”, which also features T-Pain.

One of my own favorite albums of the year, Raising Sand by Robert Plant and Alison Krauss, is up for Album of the Year and Record of the Year. The song “Please Read the Letter” is on the CD represents the album and shows the fruit of this amazing duo.

Radiohead, another great group with staying power, is up for Album of the Year with In Rainbows. “House of Cards” is on the CD and proves that Radiohead still has what it takes to create amazing music.

Lady Antebellum came on the country music scene last year and is up for Best New Artist. Their song “Love Don’t Live Here” from their self-titled album is on the CD.

The Jonas Brothers are also up for Best New Artist. Their song “Burnin’ Up” is off their album A Little Bit Longer. This is a hugely popular group at my eldest daughter’s elementary school.

Jazmine Sullivan is another artist up for Best New Artist. Her album Fearless is represented on the CD with her song “Need U Bad.”

Also in the running for Best New Artist and Best Female Pop Vocal Performance is Duffy. Her song “Mercy” haunted me for a while until I discovered who sang it. It’s off Duffy’s album Rockferry and has a distinct rock/soul vibe.

In the running for Record of the Year is M.I.A.‘s album Kala. You’ll find the song “Paper Planes” on the Nominees CD.

Competing for “most nominations” with Coldplay is Adele, who is up for Song of the Year, Best New Artist, Record of the Year, and Best Female Pop Vocal Performance. Her album 19 is represented by the song “Chasing Pavements” on the CD.

Katy Perry is another artist who gets a ton of airplay on our local radio stations here, with “I Kissed a Girl” (off her album One of the Boys) being very popular. Perry is up for Best Female Pop Vocal Performance.

Leona Lewis‘ song “Bleeding Love” is another of those heard regularly around here. Her album Spirit is up for Record of the Year and she’s up for best Female Pop Vocal Performance.

My wife is a fan of Pink’s song “So What” from her album Funhouse. Pink is up for Best Female Pop Vocal Performance.

Gnarls Barkley is back with a new album The Odd Couple. Their song “Going On” can be found on the CD and they are up for Best Pop Performance by a Duo or Group with Vocals.

Onerepublic is also quite popular on our local radio stations, and I’ve heard “Apologize” reguarly over the last few months. The song is on their album Dreaming Out Loud and the group is up for Best Pop Performance by a Duo or Group with Vocals.

Also up for Best Pop Performance by a Duo or Group with Vocals is Maroon 5 with their latest album It Won’t Be Soon Before Long (love the title!). Their song “Won’t Go Home Without You” can be found on the Nominees CD.

And finally, the Eagles released their first new album in quite a while — Long Road Out of Eden. This amazing group is up for Best Pop Performance by a Duo or Group with Vocals as well, with their song “Waiting In the Weeds” on the Nominees CD.

So as you can see, it’s quite a cross-section of the music industry again this year. I wish there were more independent artists represented, but they often don’t have the marketing money to make that possible. Even so, there is still a ton of great music on the Nominees CD. I’d encourage you to pick up a copy and take a listen before the GRAMMY Awards show on February 8, 2009 on CBS! I know I’ll be watching!

Also be sure to check out the GRAMMY website for more information about all of these artists and The Academy.

p.s. Check out the album here: 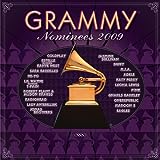