Occasionally you run across an artist who simply takes your breath away. Sometimes it’s a painting, a writer or an actor, but for me it’s more often a musician. Tori Amos in the early 1990s left a rather large impression in my mind. Little Earthquakes, her first solo album, burned itself into the airways in 1992 and Amos’ star burned brightly.

The CD for Tori Amos Live at Montreux 1991/1992 combines tracks from two different performances in Montreux, Switzerland. The first 10 tracks were from her first visit to Montreux, including Silent All These Years, Crucify, and Winter. This was just months before her Little Earthquakes album was released.

The last 6 tracks were from her 1992 show, after her first solo album, and you can hear the difference in Precious Things. The confidence rose and her voice was more stable, more sure of itself.

The album contains most of the songs from Little Earthquakes as well as a few notable covers (Whole Lotta Love and Thank You by Led Zeppelin as well as Nirvana’s Smells Like Teen Spirit). 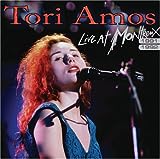 Each song tells a story. Her voice, deep with emotion, would be enough – but when paired with her amazing piano skills, she pulls you further and further in. The stories tell of her life and you’re there with her. This was the beginning of her career and you almost feel like you are playing the voyeur as the stories unfold. Her life was anything but perfect. But somehow she survived to tell the tales to her swelling fans.

The CD includes the following tracks:

This CD accompanies a DVD combining the two shows as well. The DVD is 90 minutes and includes 19 songs (including three not on the CD from the 1992 show – Crucify, Silent All These Years, and Happy Phantom).

Tori Amos has several solo albums under her belt after 25+ years in the business… Little Earthquakes, Under the Pink, Boys for Pele… fourteen albums in all, including American Doll Posse just released in 2007.

My personal favorites are Little Earthquakes, Boys for Pele, and To Venus and Back, but I swear Tori could sing the alphabet, nursery rhymes, or the phone book and it would be amazing. I’d probably pay for it. 🙂

She has led a rough life at times, including a miscarriage, marriage, and a daughter… and she continues to use music to share those experiences with the world. The world is a better place because of her gifts.

On September 30, 2008, the CD and DVD will be available from Eagle Eye Media at major retailers. If you have ever been a Tori Amos fan, this is a must to hear her as her career took off 17 years ago. Let’s all wish her another 17 years!

p.s. If you’d like to purchase this CD or DVD, check it out at Amazon: