Mac Bear runs a fish shack in the land of fairy tales, who is in steep competition with a new sushi restaurant crowding into his territory. Ruby Bear is a homemaker who dreams of making it big in show business. And Junior Bear is a smart bear trying to navigate the mine field of junior high school. They are a tight family unit who actually like spending time, talking, and eating meals together. 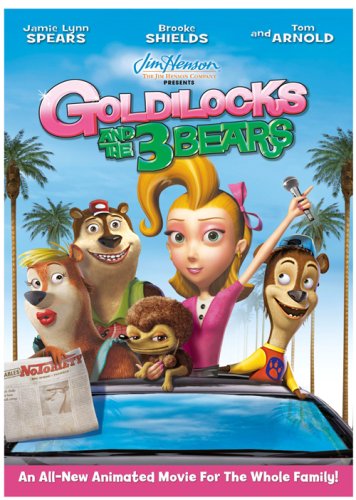 Goldilocks has a home makeover show called “Totally Fab Rehab” and chooses the Bears’ home as the next one to make over after receiving a video from Junior explaining that they would really want a taste of the “sweet life.” In her vacant blond mind, she decides that what they really want is a home made over entirely in candy. Candy windows, candy canes on the walls, candy furniture… And of course this doesn’t go well.

Once the reality of the candy house sinks in (and Hansel and Gretel make their surprise exit), Goldilocks’ agent, Jay Weasel, pitches a new show to the network… “Goldilocks and the Three Bears Show”… which is a reality show shot for 30 days. The cameras follow Goldilocks and the Bears from the time they start living together, and we see how fame and fortune affects these people who used to be doing ok as a family.

Throw in an American Idol-style talent contest, a lot of interesting secondary characters, and you have an animated story that wasn’t half bad.

My biggest problem with this film wasn’t the animation or the story, it was wondering who the target audience for the film actually was. One minute they’re doing satire of “reality” television and the next they send a character into sugar shock due to eating too much candy.

That said, the script was actually pretty well written, with witty bits meant for parents as well as jokes aimed squarely at the kids.

Besides the movie itself, the DVD has a few extras…

“Making the Goldilocks & The Three Bears Show” talks to the producers, director, and writers who created the story and brought it to life. The trick was to balance the modern world with the world of fables and still provide a message about the power of families.

“A Lesson on How to Draw a Character” takes us to the Jim Henson Creature Shop with the kids from the Melrose Elementary School. Director Howard Baker introduces the kids (and us) to the art of storyboarding for movies and how to draw for animation. It’s very interesting to see how a storyboard gets created and transformed into an actual movie. And it’s fun to watch the kids take a script and turn it into a panel in the storyboard.

In addition, they’ve included the trailer for Goldilocks and Sneak Peeks of a few other movies in the Unstable Fables collection, including 3 Pigs & A Baby, Tortoise vs. Hare, Doogal and The Reef.

This isn’t the best animated feature I’ve ever seen, but it was ok. We’ll give it 2 out of 4 stars and see what else the animation arm of the Jim Henson company has to show us.

Be sure to check out Goldilocks & the 3 Bears Show at your favorite rental or movie store!

p.s. You can find it at Amazon here: