Occasionally there are those stinkers at the box office that you just have to see for yourself to determine if it was actually as bad as everyone said it was. In the case of The Love Guru, I have to say the derision was deserved. 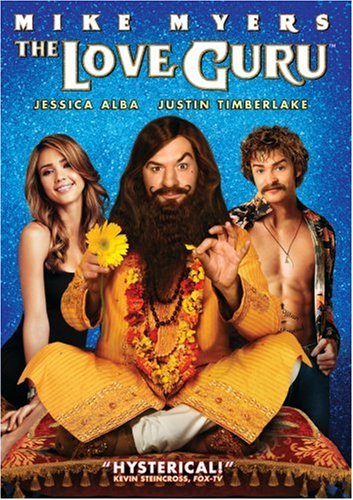 Did this movie have some redeeming features? Sure. But at some point you have to look beyond the cheap sight gags and poop jokes to see the movie for what it really is… a big steaming pile of elephant dung.

The movie begins introducing us to Guru Pitka (Mike Myers) as he strives to take the crown of #1 Guru away from Deepak Chopra (who makes an appearance in the film) and appear on Oprah. The only way Oprah would let him come on the show was if he could fix the marriage problems of Darren Roanoke (Romany Malco) for the Toronto Maple Leafs. The Leafs general manager, Jane Bullard (Jessica Alba) hires Guru Pitka to do just that.

Well, although I’ve been a huge Mike Myers fan since Wayne’s World, he really hasn’t done much for me since about the second Austin Powers film. And this movie proved that he wasn’t ready to come back to the big screen quite yet.

We’ve all seen this kind of comedy. But throwing a bunch of puns, wordplay, bad jokes, and Justin Timberlake at us wasn’t the way for Myers to make a comeback. And I love Jessica Alba, but this wasn’t the best career choice for her either.

If you like watching NASCAR for the crashes, The Love Guru is probably ok for you to watch. If not, I’d avoid it if I were you.

We give it a solid 1 out of 4, and that’s being nice. There were some good chuckles in it and a few good puns (yes, that’s an oxymoron). Plus it had Jessica Alba in it. Beyond that, there were few redeeming features.

Check it out at your peril!