The Host is another of those movies that’s been sitting in my Netflix queue for way too long, so I decided to take a look by using Netflix’ “watch instantly” option. 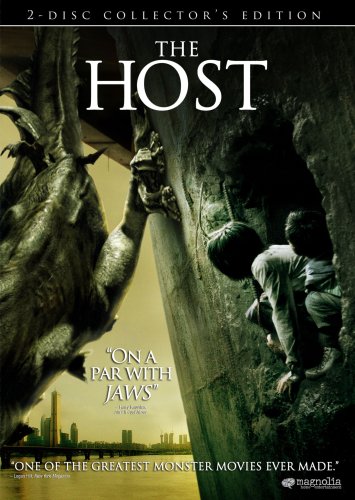 It’s always nice to know that it’s Americans that created all the world’s ills. 🙂 Who knew that a monster living in the Han River in Seoul Korea might actually be created from toxic chemicals dumped from an American military base? What are the odds?

For a foreign monster movie not from Japan (i.e. not Godzilla), I have to say this was excellent. It had the right amount of dramedy mixed with a man-made monster. What’s not to like? 🙂

So to boil this movie down… It follows the traditional hero journey. An event totally beyond the control of the reluctant heroes (toxic dumping into a public waterway that creates a monster) occurs a few years before the heroes are involved. During the monster’s first appearance, the reluctant hero (Park Gang-du played by Kang-ho Song) tries to alternately run from and fight the creature, and his daughter (Park Hyun-seo played by Ah-sung Ko) is taken by the creature and presumed dead. The hero (Gang-du) and his dysfunctional family (grandfather Park Hie-bong, uncle Park Nam-il, and aunt Park Nam-Joo) spend the rest of the movie harangued by the military, police, medical crews, and the monster as they try to rescue Hyun-seo.

Gang-du loves his daughter, but is a bit slow and insulted regularly by his brother and sister. Even so, he does everything he can to save her.

The movie has a Keystone Cops feel to it at times, but ultimately it’s about a father’s love and determination to rescue his daughter. The monster just happens to be Gang-du’s challenge.

The Orphanage did the special effects, which were actually quite good. They’ve done effects for many recent movies, including Iron Man, Pirates of the Caribbean, Aeon Flux, and Superman Returns. (Check out their website at TheOrphanage.com for more.)

Three lessons I learned from The Host…

1) River monsters like beer, consuming it can and all.
2) Korea has miles of sewers.
3) And mankind can really screw things up royally. Not only do we create the monster, but we’re seemingly incapable of stopping it as it devours our citizens.

Overall, this was a monster movie with a heart, and it was ok. If there’s ever a remake done in the United States, I don’t look forward to it. Like far too many remakes, we’d somehow remove the emotional core of the film.

If you like monster movies, this one is definitely worth watching. It ends badly for the monster, as nearly all monster movies do. But the main character changed (Gang-du). By the end of the film, he was no longer a total screw-up. It’s a monster movie with a heart.

What are your favorite monster movies? Leave me a comment!

p.s. Pick up a copy at Amazon: