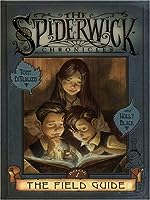 Had a chance to see the Spiderwick Chronicles over the President’s Day weekend with my two girls. And it was a great flick! The peril was perilous. The characters actually CHANGED from their experiences. The plot and story were pretty tight (which is a miracle considering they combined 5 books into 1 movie). And for the most part the special effects were front and center when they were important and in the background when they weren’t.

For those of you who don’t know, this movie is based on a series of five books for kids by the same name. The books are written by Holly Black and Tony DiTerlizzi (and illustrated by DiTerlizzi, who’s an amazing artist). It’s about a family who moves into the Spiderwick estate and discover that their great great uncle Spiderwick’s library where he wrote the Field Guide to faeries. It was a book that forever changed their lives. (Read more about the series at http://www.spiderwick.com and about the movie at http://www.spiderwickchronicles.com).

My 7 year old (who liked the 1st three books in the series we read a couple of years ago) enjoyed the film. And my 3 year old took a brief snooze to avoid the scarier parts towards the end. But otherwise I think she enjoyed it also.

Freddie Highmore plays the twins Jared and Simon Grace and you’d swear there were twin actors playing the parts. He did an amazing job as the two kids. Sarah Bolger played their big sister Mallory who did an admirable job with fencing swords against the bad faeries. Mary-Louise Parker plays their mom, Helen, coming off a bad divorce or separation from her husband Richard (played briefly by Andrew McCarthy). David Strathairn did a fine job as Arthur Spiderwick, the kids’ great great uncle. And the crazy Aunt Lucinda was played nicely by Joan Plowright.

Rounding out the cast as voices and brief appearances were Martin Short as the voice of Thimbletack. Amazingly enough Short didn’t overdo it I didn’t think, and he all too often does. 🙂 Seth Rogen did the voice of Hogsqueal. And Nick Nolte appears briefly as himself and mostly as the voice of Mulgarath the Ogre — the big baddie in the picture.

The story is ultimately about families sticking together in adversity. Unfortunately I think that got a little lost toward the end in the special effects. The first scene with the griffin kind of tore me out of the story a bit, but other than that little nitpick I thought it flowed well.

Also, the soundtrack was great. I have to admit I like James Horner. Ever since Star Trek II, he’s had my ear. 🙂 But this ebbed and flowed with the story and never got overwhelming. A good listen!

Things to like? Highmore did an amazing job as the twin boys and the story keeps you on the edge of your seat.

Thinks not to like? If you have young’uns, this may be a bit too scary in parts. And the special effects did get in the way like I said earlier.

But ultimately this was a great family movie. Adventure, suspense, and a good message for families to believe in each other, listen to each other, and stay together in adversity.

See you next time at the movies!

p.s. Do check out the series of books from Black & DiTerlizzi… They’re great!