Sometime in 2009, the new Clash of the Titans started to get some press and I have to admit I was curious.

I fondly remember the horribleclassic movie from the 1981 movie starring Harry Hamlin as Perseus, Sir Laurence Olivier as Zeus, Ursula Andress as Aphrodite, Burgess Meredith as Ammon, and more. It was a merging of stop motion and live action, but never seemed to have the gravitas it needed even then. The mechanical owl, Bubo, will forever make that movie much more cartoony than it ever should have been.

As a lover of mythology, the Greek myths were of course some of the first I was ever introduced to in school. Perseus was a hero who would of course kill the Gorgon Medusa, who could turn anyone to stone who returned her gaze.

Yes, it looks like there will be a new war between gods and men. This time with better CGI and special effects! Plus, it has a heck of a cast…

And yes, Medusa, Pegasus, and the Kraken are there too based on the trailer… I keep waiting for the mechanical owl to show its ugly head, but so far it’s escaped notice. 🙂

March 26, 2010 is only a few months away… Hopefully the new trailer will tide us over in the meantime!

p.s. In the meantime, catch the old movie on DVD or watch Sam Worthington in action: 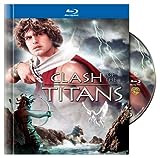