I am a huge John Cusack (and Joan Cusack too) fan and was enthused when I started seeing the promos for War, Inc. well over a year ago. Unfortunately, I have to say it left me disappointed when I finally saw it on DVD a couple of weeks ago. My wife even fell asleep during the movie, simply because she didn’t find it worth watching. 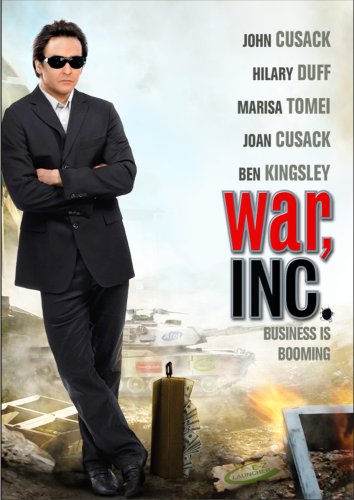 So let’s start at the beginning. War, Inc. is the story of assassin Brand Hauser (John Cusack) who is hired by an American corporation to kill an oil minster in the war-torn country of Turaqistan. Hauser works as a trade show producer to get close to the oil minister, while fighting off the affections of Yonica Babyyeah (Hilary Duff) and persistent reporter Natalie Hegalhuzen (Marisa Tomei).

Throw in Dan Aykroyd as a corrupt Vice President, Ben Kingsley as an insane CIA guy, Montel Williams as the mocking GuideStar voice… a number of weird plot twists and character quirks… put in the food processor on puree and there you have it.

Gross Pointe Blank is one of my all time favorite movies, and I felt that War Inc. was going to be its sequel at least in spirit, if not in name. John and Joan played assassins in GSB as well, after all.

But War, Inc., turned out to be a mess that never found its center. What could have been so much better instead ended up being a convoluted quagmire of plots and insane characters, never achieving liftoff. I now understand why it pretty much went straight to DVD.

What did I like? John Cusack’s character in the beginning was fun. And the sarcastic voice of Montel over the mock-OnStar-like speakers in an airplane and later in a hum-vee was great. Even Joan Cusack as the assistant trade show producer had her moments. And Marisa Tomei proved that she’s still sexy as she enters middle age with the rest of us.

What didn’t I like? Nearly everything else. Kingsley was insane without purpose. The Black Knight from Monty Python and the Holy Grail without being funny. Hilary Duff as a Russian accent tramp was just bizarre. And the crazy plots and characters in the quagmire of plot was just not worth following.

I’m hopeful that John Cusack can pull it together and do some more sarcastic things in the vein of Grosse Pointe Blank, but War, Inc. was a bust for me.

I can only give it one star out of 4. It wasn’t a total loss, but it was damn close.

p.s. If you really want this one, pick it up from Amazon: