For Halloween, I thought I’d watch one of the horror movies that’s been in my Netflix queue forever. Pulse was that movie. I remember it advertised as a scary, technologically-themed horror movie and dove in head first. 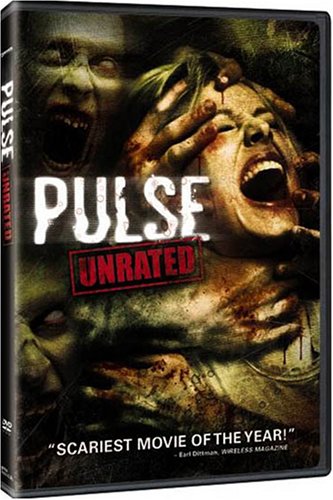 In 2006, Kristen Bell was a TV actress on Veronica Mars, working on breaking into film. And a young Ian Somerhalder was on Lost doing the same.

Pulse tells the story of a group of college students fighting a supernatural group of ghosts doing their best to eradicate the human race a person at a time. By the end of the movie, they’ve actually done a pretty darn good job.

And who knew red utility tape would be as weirdly used as it was in this film? Hollywood must have purchased cases of the stuff!

I thought it was an interesting story. But I can’t say that I was scared by it. The last movie I ever saw that actually frightened me was Salem’s Lot while I was in high school.

That said, I thought it was well done. The effects were definitely spooky. It played on our fear of technology and our fascination with the dead. And it was kind of fun to see Kristen Bell in an early movie role after seeing her in Forgetting Sarah Marshall recently.

I’ll give it a definite 2 out of 4. Wasn’t wild about it, but it wasn’t bad for a horror flick!

Until next time, go see a movie!

p.s. Pick up Pulse at Amazon below: