I really wanted to like this movie more than I actually did. Inkheart is adapted from a novel by Cornelia Funke and stars Brendan Fraser, Paul Bettany, Helen Mirren, Andy Serkis, Jim Broadbent, Eliza Bennett and even Jennifer Connelly in a small role. The basic premise is that there are a few gifted people in the world (called “Silvertongues”) who can “read” books to life. A few years ago, I actually started reading the book to my girls, but they were too young at the time and we stopped after only a few chapters. The basic story is truly magical. It’s not only a journey of self discovery for Mo (Fraser), but his daughter Meggie (Bennett). Many years before (eight, I believe), Mo was reading the book Inkheart to Meggie and his wife Resa (played by Sienna Guillory in the film), when mysteriously, Capricorn (Serkis) and Dustfinger (Bettany) came out of the book and Resa went in! From that day on, Mo travelled with Meggie across the world trying to find a copy of Inkheart (very rare, out of print book) by author Fenoglio (Broadbent). When Mo finally finds the book in a small shop of antique books, Dustfinger finds him and the adventure truly begins.

Though I liked this movie, I wanted to love it. The premise is truly magical. But the execution was almost too slow. I don’t think it was the running time (106 minutes) that was the problem, but that it didn’t capture the heart of the story.

Mo has an amazing gift. The ability to read things to life is extraordinary. And like all gifts, it has plusses and minuses. Ultimately this is a story about a man obsessed with finding his wife and keeping his daughter safe from forces that he unwittingly released. That’s the core. Around that you have Dustfinger’s single-minded goal of getting back into the book and back to his own family. And then you have Farid (a boy from Ali Baba and the 40 Thieves played by Rafi Gavron), who doesn’t want to go back. He wants to write his own story. 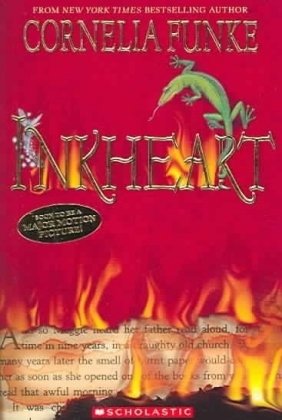 And that maybe is the punchline to the book. Dustfinger learns that he dies at the end of the book and is sure that he can control his own destiny and avoid his fate as penned by the author. He is sure that he can change his own story once he’s reunited with his wife (Jennifer Connelly by the way is Bettany’s wife in real life).

So that’s my biggest problem… There are these grand themes present in the story and yet the characters almost seem to be sleepwalking through the movie.

The one exception to that statement? Helen Mirren. She really was the life of the party as Elinor, Mo’s eccentric aunt. Seeing her ride the unicorn and on a motorcyle through various parts of the film is just priceless.

The effects are cool. The Shadow at the end evoked images of the Balrog from Fellowship of the Ring, and the fire effects from Dustfinger and Farid were very well done.

But the movie just didn’t move me the way I’d hoped. If there’s a sequel (there are two further books in the series by Funke), I hope they address some of the issues. I really want to like the series.

I can only give it 2 out of 4. It was ok but could have been so much better.