Guillermo del Toro‘s follow-up to Hellboy and Pan’s Labyrinth is Hellboy: The Golden Army. Once again we delve into the weird and fantastic world of Hellboy, Liz, and Abe. Set against the backdrop of a historic pact between the land of mythical creatures and the land of men, we learn not only about some of the denizens of the mythical world, but also about Hellboy, Abe, Liz, and a new member to the team — Johann Krauss.

Ron Perlman dons the big red suit again as Hellboy. Selma Blair is back as Liz Sherman. And Doug Jones not only plays Abe Sapien, but does his voice as well (plus a few other critters throughout the movie).

This immediately hit me like one of those movies where if you blink, you’ll miss something. It’s especially true in the Troll Market. There’s just no way to take it all in. You have to blink!

Some of the story elements I absolutely loved, such as the pact between worlds doomed by the well-intentioned Prince Nuada, and the elemental, a god, the last of its kind, bent on killing Hellboy at the command of Nuada but ultimately creating life from its own destruction in Manhattan. I also loved the descriptions of some of the critters in the world, such as the tooth fairies. These are not your momma’s tooth fairies — these guys bite!

(Had to update the post to add a picture of the tooth fairy. Vicious little buggers!)

It was great to see Abe get a love interest with the Princess and to see Hellboy & Liz develop their relationship further. But though I usually like Jeffrey Tambor, I was constantly wondering why Tom Manning was even in this film. He doesn’t really do anything but whine. Krauss also was a bit of a mystery to me. He had more crunch to his part than Manning does (voiced by Seth MacFarlane of Family Guy fame), but he never really did much either.

That said… I will be picking this movie up on DVD and going frame by frame through some of the more critter-dense areas of the movie so I can find all the things I missed the first two times!!

This movie gets a solid 3.5/4 for me. I loved it, but it didn’t blow me away like Iron Man or The Dark Knight. But I certainly hope we get to see the crew come back after Guillermo wraps up The Hobbit in a few years! 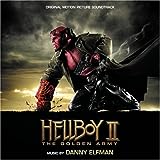