Though I’ve never been to Yellowstone, it’s hard to ignore its beauty, let alone its importance to conservation efforts around the world. Yellowstone was the first National Park established by the U.S. Congress in 1872. It spans an area nearly 3,500 square miles at nearly 8,000 feet above sea level and is crisscrossed with geysers, rivers, forests, and Yellowstone Lake. Home to nearly 60 species of mammals – wolves, lynx, elk, grizzly bears, moose, pronghorn, and many others – Yellowstone attracts nearly 2 million visitors every year. 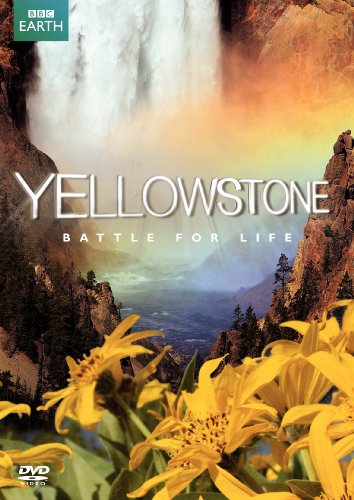 Yellowstone: Battle for Life should encourage many more visitors to take the journey. Narrated by Peter Firth, this documentary from BBC Earth contains three hour-long episodes that focus on nearly an entire year in the park, as well as some cool extras.

The series starts in “Winter” and introduces viewers to this harsh, frozen world dominated by the Druid Peak wolves and stalwart buffalo herds in the park. The longer the winter goes, the weaker the animals in the park become, making them easier targets for the wolves. And at the end of winter, the bears emerge from hibernation, hungry and eager to find any food hidden under the snow and ice.

One of the amazing scenes in this episode was of a red fox hunting mice. As the mice would move beneath the snow, the fox would listen from above – cautiously and quietly moving close enough for an aerobatic dive to get at its dinner. Simply beautiful.

From Winter we move to “Summer”, which encompasses Spring and the beginning of Summer in Yellowstone. As life returns to the park. Grizzly bear moms and their cubs are on the hunt for shoots, berries, and fish to fill empty bellies. But they are not alone – male bears are also on the prowl and are a danger to her cubs. As the Spring thaw begins, bison move down to pastures soon to become lush and green once more.

And when “Autumn” arrives, Winter isn’t far behind. Male elk begin their battles for supremacy before retreating to warmer valleys to wait again until Spring. However, what really caught me off guard was the footage of the beavers working in the ponds along riverbanks building their dams and storing food for winter.

In addition to the three episodes, there are three extras that tell stories of some of the people who keep Yellowstone going. One about the man who clears snow off the many man-made structures in the park for five months out of the year. One about the folks who watch the geysers erupt in an attempt to both document the events for scientific study, but to also inform park guests about likely eruption times. And the last is about a man who swims in the Yellowstone River and is passionate about making sure the indigenous cutthroat trout of the region win their battle against the lake trout imported for sport fishing in the region.

As always, the BBC has done an amazing job capturing the breathtaking beauty of Yellowstone. Add to that the depth of the information provided through narration and the music by E dward Butt, and you have an engrossing and entertaining documentary. At times, with the amazing flyover footage of the park, I almost felt like I was watching a feature film.

If you are a fan of nature documentaries, especially the latest series of great shows such as Planet Earth, Earth, and Nature’s Most Amazing Events, Yellowstone: Battle for Life should be at the top of your list. Be sure to check it out at your local rental or retail video store.

p.s. Pick up this and other great nature documentaries from Amazon below!